Posted May 27, 2019 by Jen in Book Spotlight Tags: Georgia Tingley 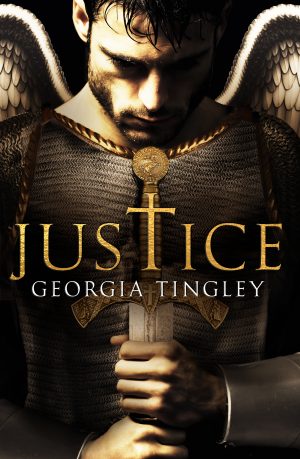 A midnight-black SUV sat in the deserted car park at The Cascade Reserve Walking Trail, its headlights illuminated the trail map on the information signpost.

Behind the sign, ribbons of mist swirled around the towering pines and fir trees, and snaked its way along the path. Dark clouds obscured the stars, ensuring the night remained even blacker. Muted music could be heard from the car as the driver studied the map. The song ended and the solitary passenger turned off the engine.

The man rummaged around in his glove box. His hand closed around cold metal and he extracted a chrome torch. From the back seat he pulled on a woolen cap, wrapped a scarf around his neck and fitted leather gloves onto large hands. Dragging a bulky coat into the front, he then opened his door, stood, and shrugged into the warmth of the weatherproof covering.

Heavy boots crunched on the loose gravel in the lot as he walked to the back of the car. From the rear door, he retrieved a long-handled spade, turned off the car’s lights, grabbed the torch, and locked the vehicle. On silent feet, he made his way down the walk trail.

Years ago, this land had been a wilderness area, solely used by hunters and dedicated hikers who accessed the region in four-wheel drives. Fast forward to present day, and it was a tourist destination in the summer months, used for camping or hiking by the cascading falls and rocky pools, which fed into the Cold Mountain River.

If he had a choice, he would not be out here in the dead of night, at the end of a particularly cold autumn season. But what he needed to do required unwanted attention, and the night was his collaborator.

The flashlight’s beam made crazy, crisscross patterns into the darkened forest with the man’s movements, illuminating a pair of luminous owl eyes. His breathing labored as the trail wound up and down; twisting around trees and over half buried rocks and fallen branches. Plumes of vaporous steam left his mouth and nose with his exertion.

After thirty minutes, he veered off the pathway and came to what years ago might have been a clearing, but was now thick with native grasses and undergrowth.

He surveyed the area and strategically placed the torch in the forked branch of a tree. Lifting the spade, he rammed it into the hardened ground, his booted foot gave added weight to the tool as it dug into the earth.

After shoveling for several minutes, the aromatic smell of wet leaves and vegetation mixed with the freshly turned earth, filled his nostrils as a hole opened. He took off his coat, hat, and scarf, tossed them over a fallen log and wiped the sweat off his brow with his forearm, before continuing to dig.

He heard a muted crack and froze. Looking around, he cocked his head to confirm where the sound originated. An uneasy awareness settled over him. He knelt in the dirt to take a closer look at what he’d unearthed and brushed the loose soil away from what appeared to be a human femur bone. If he continued to dig, he would damage what had been uncovered.

Standing over the shallow grave, the man peered at its revealed contents. Decision made, he pulled off his gloves and dropped them to the ground, lifting his face skyward. In a small patch, charcoal clouds gave way to a waxing moon and bathed the glade in a silver wash.

With narrowed eyes he focused on drawing supernatural energy into himself. He felt hot, and knew his brown irises were changing to a deep gold-yellow as sparks flickered from their depths, while tiny flashes shot out from the radiant orbs. The power was taking hold.

Outstretched arms were raised toward the moon, and a golden glowing aura surrounded his body. Spiraling downward and touching the ground, it rapidly covered the short distance to encircle the grave. He looked to the heavens once more with arms spanned to either side. An energy source, not known to mankind, enveloped his body, and raised him inches off the ground.

Now infused with an unearthly power, he lowered, his feet, now once more in contact with the ground. Fingers spread, he positioned a hand over the grave and focused his power, willing its secrets to be revealed.

The bones gradually started to ease from their resting place and rise. Thick rubble dropped away, soil and small clumps of dirt and rock falling back into the grave.

Unearthed, and encased by a gilded veil, a small childlike skeletal body was released, floating above its burial bed. His eyes locked onto the form.

The golden glow enveloping the body, now discharged shooting sparks into the overgrown grass like welding flashes, arcing out and alighting on the ground at different points. Thunder cracked and lightning ripped through the air, while an earthquake-like rumble shook the forest. The nearby ground started to lift around him. Fissures of brilliant light erupting from the area where the sparks landed. Beams of brightness, blinding in their ultra violet intensity, shone straight up into the night sky from the different locations within the open space. He stepped back and shielded his eyes from the brilliance.

The sweet-smelling earthiness of the rich soil filled the air. At the same time, several holes progressively appeared, the grass and under-brush sinking down into the exposed cavities, their contents surrounded by sparkly golden light.

Shaken, the man twisted his head in different directions, absorbing the scene before him. Within seconds, comprehension dawned and both his arms now reached out before him, palms downward and fingers spread, maximizing his powers to elevate and unmask the true horror.

Beads of sweat percolated onto his forehead and trickled down the side of his face with the effort as more small bodies arose from their graves.

The clearing, no more than sixty square feet, had released its hidden secret after forty long years.

He’d gone to that lonely, forlorn grave-site, to search for one forgotten soul. Instead, he was astounded to find seven children’s bodies – all looking for justice.

Independence Day, 4th July, 1976 – Thirteen-year-old Christine Conroy mysteriously vanishes from her back yard in a small country town in North Western USA. Folks think Christine has run away to Hollywood as she threatened, but people who know what really happened are determined to hide the truth.

Forty years later, Justice Smith is commissioned to find her body and her murderer – not an easy task after so much time has elapsed. Luckily for him, he has a secret weapon – Justice Smith is a Warrior Angel!

Sent down to Earth to seek justice for those that can’t, he uncovers a deadly secret – the bodies of several young girls. A serial killer has gone undetected, living among a small community for four decades.

To complicate matters further, Justice has a mortal connection to the prime suspect’s daughter Andi. He finds himself teaming up with an unlikely ally and while working together to uncover the truth, he crosses the boundary to break the heavenly rules for a forbidden love. Will the price he has to pay be too high?

Justice is free for the month of May

Georgia Tingley is a new player on the author scene with her breakout novel Justice the first book in the Angel Calling series.