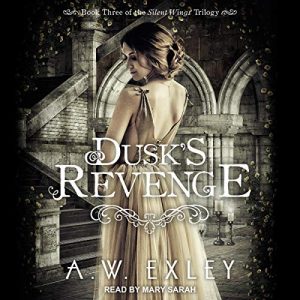 Dusk’s Revenge is the third and final story in the Silent Wings trilogy by A.W. Exley. Although a standalone romance, and the author does a good job reminding listeners of the HUGE reveals from the previous story, the book completes a wonderful story arc; therefore, I don’t recommend reading it without also reading the first two books.

The story picks up with Elijah, Jasper and Letitia Seton’s nephew (by deceased brother). He’s ready to leave the ancestral estate and avenge his father’s death now that Ava has been dealt with. Jasper and Dawn arrive back at the manor after some big discoveries made while in Whiterock during the previous book. Elijah convinces Jasper it’s his turn to help the family, and he (along with newly wedded Marjorie and Hector) head to the heart of the Hamilton clan’s territory to uncover the truth and finish the long-standing feud once and for all.

While working undercover in the mill, Eli meets Beatrice Hamilton, niece to the head of the Hamilton House. The pair experiences an immediate attraction, but through working together, they discover they share much in common, to include the desire to better working conditions for the residents of the town. Additionally, the pair discovers early on that they are a mated pair, brought together by Gaya; however, Eli knows that they are opposite elementals, so he tries to convince himself it’s a mistake. Although we aren’t privy to Trixie’s thoughts, her actions and the degrading manner in which her uncle and fiancé treat her give readers a pretty good idea of how horrible her life must be. I absolutely loved seeing Eli fall for Trixie and witness his transformation from a hurt son bent on revenge to a man in love hoping to end centuries of conflict. His hurt over knowing he’ll have to let his mate go once she discovers the truth is palpable and tore at my own emotions.

Narration: Unlike the previous two books, Dusk’s Revenge is shared (with one minor exception) via the third person POV of the male lead, in this case, Elijah. Ms. Sarah maintains the soft feminine and gentle narration used in the previous books, which continues to work even though the main character is male. She alters her voice for each character’s dialogue, with males a bit deeper but still soft spoken. Overall, the soft, lilting, wispy nature of the narrator adds to the whimsical nature of the story. It’s comforting, but emotional when called for.

Dusk’s Revenge takes a hard look at what it means to have true balance in the world. Elijah comes to terms with centuries of watching the pendulum swing back and forth to discover that there is another way and he and Trixie can bring about a new normal. Dusk’s Revenge is the perfect ending to the trilogy: it’s not a perfect world but they’ve done their part to bring harmony and balance.

Fire must be free…

Elijah Seton steps into the world in pursuit of a ghost ship and those who murdered his father. He thought he knew his enemy, and he would do anything to see them fall. But he was wrong. Elijah’s world is turned upside down when he finds a rare woman that his heart demands should fly free.

Beatrice Hamilton lives with wealth and ease in her gilded cage. Until a new mill worker rattles her bars and gives her a glimpse of the freedom beyond. As the two work together, centuries of hate and anger are revealed that keep them apart.

Can they set aside old feuds to forge a new future?