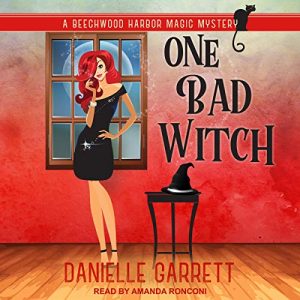 Although I’ve enjoyed the Beechwood Harbor Ghost Mysteries and Haven Paranormal Romance series, it’s great to finally get back to where it all started with Holly Bolt. One Bad Witch is set about six months after the conclusion of Lucky Witch, the 5th book in the Beechwood Harbor Magic Mysteries series. Lacey moved back home (Once Upon a Hallow’s Eve) and the three remaining roommates of the Beechwood Manor have had a string of horrible temporary roommates pass through their door. Holly has been working at the Supernatural Protection Agency (SPA) learning all sorts of new potions and skills. She and Adam are still going strong (although he doesn’t like she has to keep her work secret). She’s still working part-time at Siren Song with Cassie (who is planning her wedding to Chief Lincoln), and her own potion business is booming. All seems nearly perfect until Holly’s SPA boss, Agent Bramble, asks her to spy on the Manor’s newest resident, Narissa, in connection with a string of werewolf murders.

I have to admit, I was a bit worried about this one after the initial set up. First – all is not well with Adam and Holly… AGAIN *heavy sigh and eye roll* He wants to move out of the manor and into their own place, and Holly is… unsure. This back and forth, wishy-washy attitude of Holly’s has bothered me for several books, and what bugs me the most, is that by the conclusion of each story, everything seems good and solid between the pair, only to have uncertainty creep in again in the next title. Couple that with Holly’s requirement to be secretive and spy on their roommate, and I thought for sure Adam was going to walk away. With that said, Ms. Garrett wrote a wonderful story, and I forgot all about my initial concerns as soon as the heart of the story took shape.

Holly always seems to find herself in the middle of danger, but this time around, she’s there on official SPA business. I liked that she got to really see the inner workings of the SPA and what it means to be a field agent. She does a great job, giving her reason to seriously consider her future plans. The mystery of who is killing the werewolves also provides Holly time to finally discuss with Nick his change. They don’t always see eye-to-eye during the story, and I like that they have to talk things over and work out their issues.

Narration: As always, Holly and her friends are brought to life through the performance of Amanda Ronconi, who has consistently done a wonderful job. Her interpretation of Holly is always spot on – a bit flustered and frazzled, but with an air of determination – just like Holly. Ms. Ronconi convincingly portrays Holly’s thoughts, concerns, and expressions. Her female voices are each a bit different and well-suited, and she gives frequent paranormals their own fitting voices. However, her male voices, while appropriately deeper and extremely enjoyable, all sound very similar.

In the end, One Bad Witch is a fun mystery with a lot of introspection by our heroine, Holly. I like that things come full circle, and Holly works out some important life decisions. The story almost had an air of closure and finality. Overall, I liked the story and where it ended.

Holly’s cauldron is bubbling over and ready to blow!

Following six months of intense training under some of the country’s most skilled potion masters, Holly’s head is full to the brim.

When she’s offered a new assignment with the Supernatural Protection Agency, she jumps at the chance to take her newfound skills out of the workshop and into the real world.

What she didn’t expect was to wind up tailing a suspected werewolf killer right in her own backyard.

When another werewolf turns up dead, Holly and her roommates are locked in a race against time and the killer might be even closer than they think.