Audiobook review: She Dreams of Fire 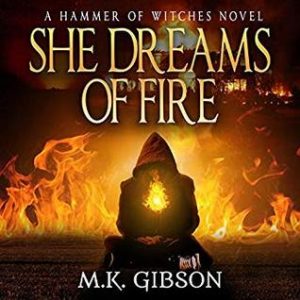 WOW! Have you been looking for a new urban fantasy series? Let me direct your attention to She Dreams of Fire. Right from the explosive beginning, I was drawn into this dark underworld of witches and paranormals. The prologue outlines the story of Aggy’s origins. As a young child, a coven of witches went to her home, murdering her mother and leaving her unknown child, Aggy, to die in a horrible fire. But when EMT Marcus arrives on scene and discovers the child, he saves her by giving her a blood transfusion. Unknown to him, he used the blood of the dying warlock who killed her mom.

Fast-forward 15 years and we find out that Marcus, now a doctor, is a vigilante hunting criminals, and Aggy is drug addict stalking and killing the coven of witches responsible for her mother’s murder. When their paths cross for the first time since her rescue, their lives become forever tangled, and Marcus is drawn into a dangerous magical world.

She Dreams of Fire is an amazing start to the new Hammer of Witches series. With its well-written, smart and unique mythology, the story takes listeners on a journey into the dark world of powerful witches. This world is filled with all sorts of fae creatures and fabled beings, many of which are creatively borrowed from various world mythologies. The creatures live right alongside humans, and in fact, the primary bad guy, Vanessa, works as a police detective, using her dark powers to solve crimes, but also cover up her own misdeeds. The story is packed with intense action, keeping me engrossed from beginning to end.

What gives this book heart is the great crew of motley characters. The three primary characters are each strong and driven, but diverse, making them all very interesting. Heroine Aggy is messed up for a number of reasons, mostly due to the early death of her mom and the fact that her aunts hid some very important parts of her ancestry. Aggy deals with life by looking for the next bigger and better high, but through her adventures during this book, she comes to terms with her past and discovers the power of friendship.

Marcus is an anti-hero, dealing with his own darkness through killing the dregs of society. He doesn’t consider himself a hero, but those around him recognize him as such. Villainess Vanessa is cold and manipulative and everything perfect for an evil being of power. Then there are the side characters such as Aggy’s human BFF, Ji, newly discovered friend of her mom, Elena, and Aggy’s magical talking rabbit.

Narration: This is the third book I’ve listened to with Xe Sands, and each one is better than the last. She does well with urban fantasy/fantasy genre. The story is shared via third person POV, shifting primarily between Aggy, Marcus, and Vanessa. While the story’s narrator remains a neutral feminine voice, it’s deep and soft, kind of scratchy, giving a gritty feel to the dark story. Ms. Sands changes her tone for the characters’ dialogue, deepening for males, adding slight accents when called for, creating a unique set of voices for the diverse cast. She captures Aggy’s desperation and loneliness wonderfully. She injects emotion without being dramatic. I just love her soft, gritty voice.

In the end, I have discovered a wonderful new UF series in She Dreams of Fire. Mr. Gibson’s world is dark and dangerous, filled with unique and engaging characters. It is perfect for fans of Dresden Files or those feeling the void left from the conclusion of UF greats like Kate Daniels or the Iron Druid Chronicles. Between the amazing worldbuilding and the small bombs dropped at the end of She Dreams of Fire, I cannot wait for the next book. I need it now!

Agatha “Aggy” Grae was only ten years old the night a witch of the Umbra Coven killed her mother and burned her home. Injured, she received a transfusion of blood tainted by witchcraft, and immediately her eyes were opened to the truths hidden from mundane eyes. She saw a new world, a hidden world, one filled with darkness and secrets.
And that new world was now aware of her.
Through the years, Aggy never quit hunting the mysterious coven. From the shadows she gathered information, stepping out only to hurt those who dared to hurt others. But everything changed the night she helped a familiar-looking stranger. Through magical means, Vanessa, a high witch of the Umbra Coven, has learned of Aggy. Following the orders of the coven’s leader, The Veiled One, Vanessa has begun her own hunt, one that can end only with Aggy’s blood.
She Dreams Of Fire is a story of strength. In order to survive, Aggy must defeat her own doubts, addictions, and fears. In order to win, she has to endure everything the witches and the Hidden Folk throw at her. Partnered with a man from her past, the unlikely pair must learn to trust each other as they suffer betrayal, discover hidden truths about themselves, and battle the monsters in the dark.
But does Aggy have the strength to walk through the fire?
Purchase Info: AMAZON