Audiobook review: When Good Ghosts Get the Blues 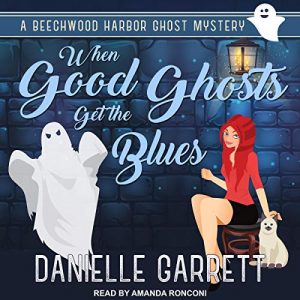 Picking up shortly after the conclusion of the previous story, Scarlet is going on a week’s vacation to New Orleans with boyfriend Lucas, where he is working. She is insistent the trip be ghost-free, so Flapjack, Hayward, and Gwen are left home. But of course, the no-ghost zone doesn’t last 24 hours as Scarlet runs into a spirit at Lucas’s project site. The ghost warns that there is a malevolent spirit trapped in the library, so she’s making havoc on the set to keep people from entering. Cue the high-profile murder victim discovered in the library, only this time around Lucas is the primary suspect.

When Good Ghosts Get the Blues is the third entertaining tale in the Beechwood Harbor Ghost Mysteries. I like how Scarlet continues to grow and develop her powers as the series progresses. I also enjoy the fact that Scarlet has found a true friend and confidant in Lucas, who is accepting of her quirks and the supernatural world around him – one he can’t even see. Just when I think Scarlet will make a mess of things, she stays grounded, or she’ll confide in Lucas, giving her a good perspective on any situation. I love the progress of their relationship – steadily moving forward, hiccups and all.

While I think it was pretty silly of Scarlet to expect a ghost-free time in one of the most notorious haunted cities in the U.S., I appreciate that she wants some normal interactions with Lucas. Yet when things go south (suspect of murder!), Scarlet’s ghost besties make their way down to NOLA ready to help. I felt that Scarlet was a bit of an idiot for not utilizing their help more immediately and efficiently. I was also disappointed that she made a few poor decisions in this one – for example, going to the murder scene on her own in the middle of the night?! But it all worked out in the end.

I did enjoy learning more about the magical aspects behind Scarlet’s ability to see ghosts. I wish more had been explored when she was in NOLA, but I understand the need to pull back and take it slow. She did have a long chat with Beechwood’s resident witch, Holly, which I enjoyed.

Narration: I’ve been listening to Amanda Ronconi read the original series and now this spin-off for over a half dozen books, and she has consistently done a wonderful job. The Beechwood Harbor Ghost Mysteries is voiced from the first person POV of Scarlet. Ms. Ronconi captures Scarlet’s kindness, generosity, and determination. But also convincingly voices her frustration when called for. Additionally, Ms. Ronconi gives each of the three primary ghost regulars distinct and appropriate voices, and her male voices are generally deeper and fitting. The only negative I have this time around is that Scarlet and Holly (main character of the original series) sound nearly identical, so when they had their one-on-one conversation in this book, it was a bit confusing.

Overall, When Good Ghosts Get the Blues is another fun story in Ms. Garrett’s entertaining Beechwood Harbor universe. The balance of Scarlet’s personal relationships and growth with murder mysteries and ghosts is ideal. I really enjoyed learning more about Scarlet and her unique gifts.

I have them. Real life is not cooperating.

I don’t require poolside margaritas under a fancy cabana to have a good time. All I wanted was ten ghost-free days to enjoy sightseeing New Orleans with my boyfriend, to admire art galleries, listen to live music, and eat as many beignets as I can before my pants stop buttoning.

I might as well have asked Santa for a unicorn.

Within thirty-six hours of setting foot in the Big Easy, an ancient ghost warns me of a murderous spirit lurking in the city, a strip-mall psychic tells me I look pregnant (I blame the beignets) and, oh, yeah, a dead body shows up on the set of my boyfriend’s TV show and he lands himself at the top of the suspect list.

If this karma, I must have been an ax murderer in a previous life.