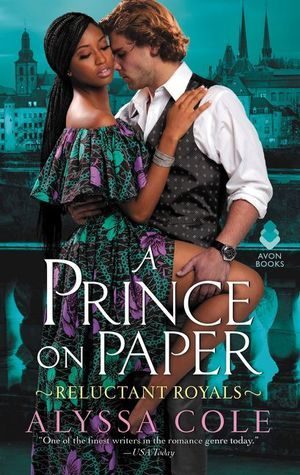 After living a caged and sheltered life in the name of her father’s love and concern, Nya longs to spread her wings and escape the shadow of her treasonous father. Yet, her time in NYC left her feeling disappointed. Now on her way back to her homeland of Thesolo for her cousin Ledi’s wedding to Prince Thabiso, she is uneasy and worried.

Thabiso’s best friend, Johan Maximillian von Braustein, stepson to the king of Liechtienbourg has wanted Nya since he first laid eyes on her, but he cannot allow himself the pleasure of falling in love or being serious because he believes love leads to sorrow and loneliness. He perpetuates his Playboy Prince persona to keep the media spotlight off his 17-year old brother, especially as the kingdom’s vote on ending the monarchy quickly approaches.

After a handful of misunderstandings causing others to believe the pair is having a scandalous affair, Johan proposes to Nya in hopes to help them both. She’ll get to leave Thesolo and get away from her father and his influence. He’ll play to the press and show his respectability, helping sway voters in the referendum. I found the first third of the book, with the constant misunderstandings and assumptions surrounding Nya fun at first, but I quickly grew frustrated on her behalf. However, when the story changed to the fake-wife trope, I was so happy! This gave the couple time to become true friends, and allowed Nya the chance to explore her own sexuality with someone she trusts.

A Prince on Paper is a lovely romance between two individuals both scared to trust their feelings or believe in a happily ever-after. Nya’s father used her love for him and the death of her mother in childbirth to control her, manipulating her into obedience. And when that didn’t work, he poisoned her, keeping her weak and frail. She feels she is unworthy of love, so she’s happy to believe Johan is pretending to care about her, as long as he pretends believably and doesn’t burst her bubble. Meanwhile Johan is so scared of a fairytale in his own life because someone always dies in fairytales, just like his mom did when she married her Prince Charming. So he sees Nya as the poison apple and tries to keep emotion out of it.

The author tackles love, politics, sexual identity, and betrayal. A Prince on Paper is truly a fairytale story: complex but simple, with a sweet HEA. There are ups and downs, and I hurt for the couple as they allowed the conflicts to break them apart. I felt the primary conflict outside the romance was solved way too easily, but this is a fairytale.

Nya Jerami fled Thesolo for the glitz and glamour of NYC but discovered that her Prince Charming only exists in her virtual dating games. When Nya returns home for a royal wedding, she accidentally finds herself up close and personal—in bed—with the real-life celebrity prince who she loves to hate.

For Johan von Braustein, the red-headed step-prince of Liechtienbourg, acting as paparazzi bait is a ruse that protects his brother—the heir to the throne—and his own heart. When a royal referendum threatens his brother’s future, a fake engagement is the perfect way to keep the cameras on him.

Nya and Johan both have good reasons to avoid love, but as desires are laid bare behind palace doors, they must decide if their fake romance will lead to a happily-ever-after.