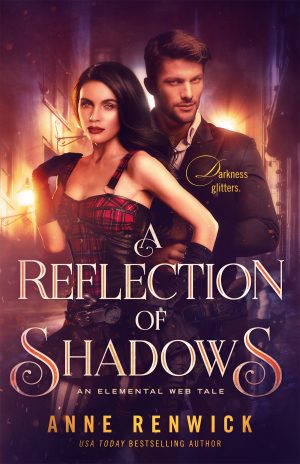 A Reflection of Shadows is another exciting adventure set in Ms. Renwick’s clever steampunk historical London. Building on the foundation set in The Iron Fin, the story further explores the idea of humans exhibiting animal-like traits. This time around Colleen, with her golden eyes and increased dexterity like a cat, uses her unique features as a thief of goodwill. In her journeys and among her society engagements, she’s befriended the handsome Nicholas Torrington, an agent of the queen, with ties to organizations and characters explored in previous titles.

As an agent of the queen Nick has seen it all, but when he hears of an experimental device that may save his dying sister’s weak heart, his missions become personal. Seizing the opportunity to express his admiration to Colleen and win her over by making her his partner, Nick proposes marriage as a matter of convenience, but intends to make Colleen his bride. The pair work to discover the truth behind layers of subterfuge and hope to save Anne in the process.

While I found the opening of A Reflection of Shadows a bit confusing as I tried to piece together the separate yet intertwining stories behind Nick and Colleen, the story soon picked up pace and was gripping until the very end. I love watching the pair work as truly equal partners. Nick trusts Colleen completely and respects her intellect and decision-making. He knows the way to her heart isn’t through flowers and dances, but secretive roof-top  missions and clandestine rendez-vous. He is her perfect partner, and I loved watching him pursue her affection.

Colleen loves her life and isn’t certain she wants to give up anything for a man, so it’s with true admiration and a bit of relief that she finds herself falling for Nick. While always attracted to the man, she is cautious with her heart and is rewarded with her perfect match in Nick. What happens to Colleen in the name of furthering medical science is horrifying, and the author doesn’t let the pair come together easily. The traitorous villains surround the couple and nearly finish their romance before it truly has time to bloom.