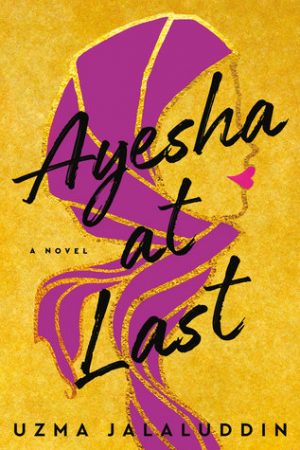 Ayesha at Last
Author: Uzma Jalaluddin
Reviewer: B.
Rating: B+

Beginning with the highly apt question, “When do you get to be happy?” Ayesha at Last introduces readers to Ayesha Shamsi, a twenty-seven year old Canadian Muslim with the soul of a poet, who has just begun her new life as a substitute teacher. After living for so long with the pain of loss and the acceptance of familial obligation, Ayesha has given up on finding love, trying to convince herself that she’ll be better off on her own. As strong as she is, Ayesha probably would be “fine,” but I was glad when she decided she deserved more.

As an “observant Muslim man who walked with faith both outwardly and inwardly,” Khalid Mirza is, for the most part, content. He works hard, respects his widowed mother, and readily finds solace at their neighborhood mosque. At the age of twenty-six, and being from a wealthy family, he’s also ready to settle down, just as he’s expected to do. Firmly believing that marriage precedes love, he is satisfied to wait for his mother to find a suitable wife for him—until he meets Ayesha.

No matter how many I’ve already read/seen/listened to, I never can resist a retelling of one of Jane Austen’s novels. Before being offered the chance to do this review, I hadn’t heard anything about Ayesha at Last, an Own Voices debut from the very gifted Uzma Jalaluddin. Now that I’ve finished the story, I’m extremely glad I didn’t miss the opportunity to see Ayesha and Khalid’s journey through to the end.

While the author takes advantage of the seemingly inexhaustible adaptability of Pride and Prejudice, Ayesha at Last stands firmly on its own, delving into histories and side plots that Austen’s classic couldn’t have included. One familiar point that is made (often comically) clear here is that it’s a very dangerous thing to make assumptions, especially about ourselves. Similarly, the cliché “never say never” is just as true in Ayesha at Last as it is in the original, albeit within the specific context of the two main characters.

The secondary characters in Ayesha at Last cover the entire spectrum from completely wonderful to absolutely loathsome.  Among the former, my hands-down favorites were Ayesha’s Shakespeare-quoting Nana and dangerously observant Nani, both of whom  ground her with humor, wisdom, and boundless affection. Those who take the roles of the latter category, however, are truly reprehensible, saturating their parts of the narrative with racism, selfishness, duplicity, and pure meanness. As much as I really didn’t like these characters, I admit that the resulting payback some of them received was kind of delicious.

On the whole, I found Ayesha at Last to be a funny, sweet, and welcome perspective on the many different ways love can get us all in the end. Despite a couple of things that temporarily threw me off balance (spontaneous POV shifts, etc.), I enjoyed the author’s take on one of my favorite classics very much. With quite a few recognizable missteps, generous helpings of Shakespeare, and a well-deserved happy ending, I believe Ayesha at Last makes Uzma Jalaluddin an author to watch for a long time to come.

Ayesha Shamsi has a lot going on. Her dreams of being a poet have been set aside for a teaching job so she can pay off her debts to her wealthy uncle. She lives with her boisterous Muslim family and is always being reminded that her flighty younger cousin, Hafsa, is close to rejecting her one hundredth marriage proposal. Though Ayesha is lonely, she doesn’t want an arranged marriage. Then she meets Khalid, who is just as smart and handsome as he is conservative and judgmental. She is irritatingly attracted to someone who looks down on her choices and who dresses like he belongs in the seventh century.

When a surprise engagement is announced between Khalid and Hafsa, Ayesha is torn between how she feels about the straightforward Khalid and the unsettling new gossip she hears about his family. Looking into the rumors, she finds she has to deal with not only what she discovers about Khalid, but also the truth she realizes about herself.