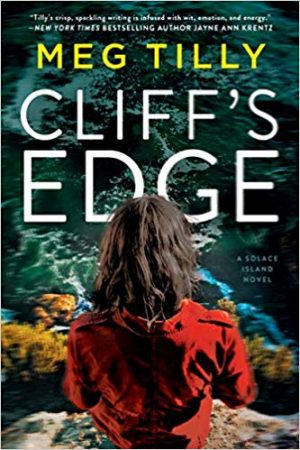 Author Meg Tilly, yes, THAT Meg Tilly, is a new-to-me author.  This is her eighth book, but only her second in the romance genre with Cliff’s Edge, the second book in her Solace Island series.  Tilly admits that her earlier books were cathartic as she worked through darkness born of childhood abuse at the hands of her step-father.  With this new trilogy, she said she’s enjoying finally writing the kind of books she likes to read “with a little bit of that dark” thrown in to make the story interesting.

More and more romance books seem to be set in bakeries—or maybe I’m just seeking them out???  Cliff’s Edge, which falls into this sugary subcategory, is set on Solace Island off the Washington State coast and is centered around the Intrepid Cafe and Bakery owned by sisters Maggie and Eve Harris.  Solace Island was Maggie’s book and Eve is the focus of Cliff’s Edge. Maggie is the chef behind the business and Eve runs the front of house and does the books. Her real passion is painting, but she loves being close with her sister.  She is strong-willed and doesn’t need anyone to save her.  Eve has a murderous stalker, and I loved seeing her work her own way out of difficult situations even while I was stereotypically waiting for a big strong man to swoop in and save her, or maybe especially because I was waiting for the hero. She makes a good partnership with love interest Rhys Thomas, actor of Chris Hemsworth status, who has come to Solace Island to escape the craziness that is his normal life for a short vacation.

The two meet when Maggie and her new husband Luke leave town for a delayed honeymoon.  Eve is enlisted to house sit and take care of Maggie and Luke’s enormous dog.  Meanwhile, Luke consents to let his friend Rhys stay at the house as well, but doesn’t tell Eve he’s arriving so she won’t back out in the name of some backdoor match making.  Their initial meeting is not cute, but it is funny.  Their relationship is supportive and adult.

I liked the book very much, but it had a few technical failings which feel like a they stem from a lack of writing experience or editing, not something intrinsically wrong with the premise of the story.  None of them are tragic.  They include near insta-love, which I don’t hate as much as other reviewers seem to, predictable similes like “washboard abs,” and descriptive vocabulary during the explicit loves scenes that is inconsistent with the characters themselves. In trying to include the different senses in her descriptions, there seems to be an over-abundant focus on smells.  Lastly, Tilly sometimes uses a few metaphors that are so far out of left field that they don’t to fit within the normal romance reader’s experiences, “To resist would be as futile as iron filings thinking they could escape the lure of a neodymnium magnet.”  Huh? I get the irresistible intent, but how does this fit in the world of an artist, actor, business owner, and baker? Honestly, the whole story would be better depicted visually as a movie where we could see some of the elements Tilly struggles to convey.  Perhaps that’s an outcropping of her cinema background. The writing does show legitimate potential though which I believe will continue to improve.  I will return for the conclusion of this series. 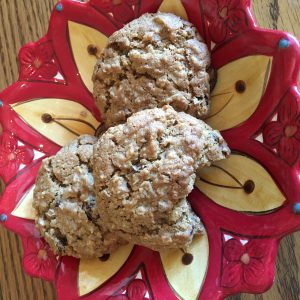 In honor of being set in a bakery, Tilly give us what she says is her personal recipe for oatmeal cookies in the author’s notes. Of course I had to make them. I love a good oatmeal raisin cookie and am always in search of a good recipe or a good tweak to try. I give these cookies a solid A! There are buttery, flavorful, and really textural, which is wonderful.  The only changes I made to her recipe were to use a larger scoop which required a longer baking time, and I grated my nutmeg fresh rather than use ground nutmeg. As a result of using the larger scoop, the recipe made 18 cookies. Maybe if I had made the cookies first to eat while I was reading, I would have been more forgiving of the book’s non-fatal flaws. Get the book.  Bake the cookies. Read the book. In that order.

Eve Harris is all set to house-sit and run the bakery she shares with her sister while Maggie goes on her honeymoon, but there’s one problem–the house is already occupied. By a movie star. He claims to be her brother-in-law’s friend, and not only does he insist on staying, he also offers to help. Playing house has never been so tempting…

Rhys Thomas is looking for a place to lie low after wrapping up his latest film, so when Luke offers up his house as a safe haven, Rhys sees the perfect opportunity for a little R & R. But rest is the last thing on his mind as he and Eve grow close.

But Eve and Rhys are not as alone as they think. And as danger trails Eve, it will take everything Rhys has to save the woman he loves.