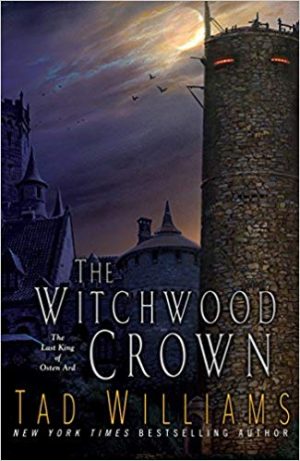 Tad Williams is a strong, well-established fantasy author.  In 1988 he published The Dragonbone Chair, the first volume of Memory, Sorrow, and Thorn.  He’s the guy George R. R. Martin, author of Game of Thrones, credits with inspiring “…me to write my own seven-book trilogy…. It’s one of my favorite fantasy series.”  You can see where that influence comes from in Williams’ series, which predates Martin’s series by eight years, with characters like the Storm King of a cold, harsh northern people with supernatural powers, the horse people of the grasslands, high kings, secret societies, and even dragons. Two and half decades later, Williams picks up his story again with a new series, Last King of Osten Ard.  As a contemporary of David Eddings, Williams follows the tradition of epic world-building that requires maps in the front cover, and an appendix in the back with character lists, pronunciation guides, and a glossary.

The book had a slow start for me.  Not having read the series that proceeded this one left me scrambling to learn the geography and history.  While I appreciated that there were no big information dumps, it took longer to learn the lay of the land and relationships between widely disparate groups.  Frankly, there wasn’t a lot of action, just a lot of whining and complaining among the humans while the reader gets educated through immersion.  I found the Norns, the greatest enemy of and threat to the human population which has grown and spread since the last war with the Storm King, to be much more interesting.  Their empire seemed to be loosely similar to ancient Chinese dynasties, but the Norns are so long lived that they are effectively immortal. They might only have one birth, however, in a hundred years so their numbers put them at a disadvantage.  With a long and lingering build-up, we finally get moving about 60% of the way through the book.  We know the characters and places enough to see them split up into the multiple storylines expected of an epic fantasy.  Unlike Eddings series, where each book is its own but contributes to the overarching storyline, the Last King of Osten Ard is clearly meant to be read in order as one enormous story.  The Witchwood Crown was one long introduction. There is one heck of a plot twist right before the end which I will not spoil for you, but yeah, whiplash.

I’m impressed with Williams attention to detail.  In every culture there is little pieces of minutia that find their way into everyday speech, expressions that are just understood, which you only know if you grew up there.  People in California don’t understand the significance of a black and white cookie to someone in New York.  In Utah you get fry sauce—not ketchup and in Massachusetts if you order a milkshake, you will not get a creamy drink with ice cream—that’s a frappe.  The way we live our lives is so connected to architecture, religion, superstition, fears, food, and shared history that this kind of world building is difficult to make feel authentic.  Williams does it very successfully. There is clearly no piece of minutia that he hasn’t given some thought.

This isn’t a read it all in one night, page-turning thriller.  It is the escape you’re so looking forward to that you go to bed at 8:30 so you can travel to lands beyond and live another life until you have to go back to your own.  It’s the kind of book that you parcel out so you don’t finish it too quickly, enjoying the journey.  I’m on the road and looking forward to book two, Empire of Grass.

Twenty-four years after the conclusion of Memory, Sorrow, and Thorn, Williams returns to his beloved universe and characters with The Witchwood Crown, the first novel in the long-awaited sequel trilogy, The Last King of Osten Ard.

More than thirty years have passed since the events of the earlier novels, and the world has reached a critical turning point once again. The realm is threatened by divisive forces, even as old allies are lost, and others are lured down darker paths. Perhaps most terrifying of all, the Norns—the long-vanquished elvish foe—are stirring once again, preparing to reclaim the mortal-ruled lands that once were theirs….