Posted May 12, 2019 by Jen in Sunday Snippet Tags: Damien Larkin 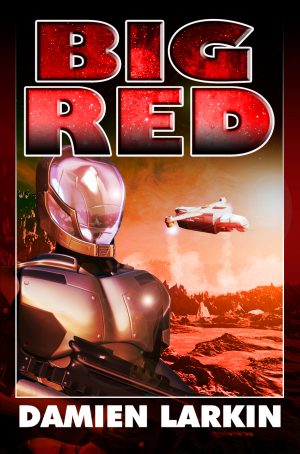 At first, I thought the piercing white light that bore down on me flowed from the sparks of an electric buzz saw. A relentless, slicing agony carved through my brain, tearing through flesh and bone, mind and memory. My skull felt as though it was being split in half. But I heard no high-pitched scream of a saw and, from an involuntary muscle spasm in my arm, I found I wasn’t restrained.

It took a moment for me to realise sparks weren’t raining fiery kisses onto my face and the light above me remained as constant as a laser. I hadn’t blinked in what seemed like an eternity, so upon forcing my eyelids shut and reopening them again, my senses burst to life. I rolled over and lifted a shaking hand to rub my throbbing temples. Through my blurry vision, I could make out the polished marble floors of the room. Beside the leg of the folding cot, I spied cracks on the floor and vaguely recalled noting those same cracks the first time I had climbed onto this hard mattress a year before.

Dazed, I perceived another needle of fire being strategically inserted into my brain, causing incomprehensible pain. I let out a roar as my eyes teared up, and I struggled for breath. I gasped, trying to suck in sweet, unrecycled air, and another harsh pain surged through my chest, temporarily forcing me to forget the buzz saw slicing its way through my skull.

In response, a firm, gloved hand gripped my shoulder and eased me back onto the mattress. A masked figure blocked the painful light glaring down on me, and cold, gloved hands prodded at my head and body. I tried to speak but screams and whimpers escaped. I sensed the cool tears running down my face and squeezed my eyes closed to stop them.

That only made things worse.

In the darkness of my mind, figures emerged and disappeared. They looked like faded silhouettes of people I had known and grown to like—or at least endured—but I couldn’t see their faces. It started slow at first, just one or two shadows emerging long enough to mimic a humorous incident from long hours of training, but as the pain in my chest intensified, the silhouettes rushed faster and faster, eager to reach their climax. Days, weeks, and months sped past in a heartbeat, each image more vivid and detailed than the last, until that final moment, and I knew why I was screaming.

I bolted upright in the cot, knocking the doctor away from me. With eyes wide open, I remembered my wound. I saw the stunned doctors shouting for an orderly over the high-pitched ringing in my eardrums. Panicking, I grabbed at my chest to stop the blood from oozing out of my wound. My trembling hand touched the dark green T-shirt that we all wore, but to my surprise, I didn’t feel the gaping hole that should have been there. I pulled up my T-shirt to see my pale, hairless skin untouched by blood, not burned flesh. I prodded at myself in disbelief, expecting a barb of pain to shoot through the area where I thought had been operated on, but I felt nothing. The pain in my head and chest retreated, as did the ringing in my ears. It was then that I noted the screaming and shouting around me.

Two pairs of sturdy hands eased me back onto the cot mattress again, and still struggling to make sense of my jumbled thoughts, I offered no resistance. Lying back on the soft pillow, I moved my head from side to side as the doctor completed her checks. She looked vaguely familiar, even behind the mask, and something told me she was trustworthy.

All around me were rows of cots with dozens of uniformed soldiers in various states of agonised shock. Some fought with the orderlies, roaring and screaming incoherently, and others were curled up in the foetal position, numb from what they had experienced. Cries of pain and bitter sobs of regret echoed throughout the room, a testament to the horror we had survived.

A light shone into my eyes. Looking up, I saw the red-haired doctor standing over me, studying me in-depth. This time, the light caused no pain, so I let her do what she needed. After a moment, she pulled down her face mask and, with a clinical expression, spoke to me.

“Do you remember where you are?”

I didn’t. The room was familiar. I knew I had been here a year before, but a fog draped itself over my memory. I was positive I could navigate the halls of this place but had no idea of its purpose or what we were doing here.

“Yes,” I lied, surprised to hear my voice so hoarse.

I must have been screaming non-stop from the moment I regained consciousness. As if reading my mind, she reached behind her to a small, metallic trolley and pulling out a plastic container with a flexible straw, uncapped it, and handed it to me. My quivering hands accepted it. Parched, I sucked on the straw. The cool water made its way down my aching throat to spread instant relief throughout my body.

“What’s the last thing you remember happening?” she asked, scrutinising my every movement.

Although it sounded like a typical question to be ticked off a medical checklist, I got the impression that the doctor had no idea what we’d been through and was genuinely confounded by our pain-filled outbursts.

“I got shot,” I groaned and tapped at my chest.

For a moment, the pain was real again. Searing, hot flames engulfed my torso and ate away at my innards, but as soon as I patted myself, it faded. A part of me wondered if it had really happened, if it was part of a twisted nightmare or a side effect of the treatment, but the memory felt so real. I couldn’t remember the exact circumstances, but I recalled being lodged into a shaft or confined space with two or three others when I got hit.

“I need you to focus your mind and try to remember. Did anyone else make it? Is anyone else alive up there?”

I could see snippets of a firefight and older memories of training and patrols but nothing else sprang to mind. Sensing the urgency of her question, I focused on that image of the shaft and studied it for tell-tale clues. At least three others were there, but from the shouts and sounds of explosions that hung outside the boundaries of my memory, there had to be more. I remembered being terrified to the core. Although the adrenaline kept me moving, my hands had trembled as I held my weapon. The sound of intense hand-to-hand combat echoed from all around us, and the screams of the dying grew closer as an unseen enemy approached.

“Think,” she said, rubbing my shoulder gently with a cold hand. “Did anyone else make it out alive?”

Traumatized by the effects of Compression travel, soldier Darren Loughlin holds the key to the fate of Earth’s Martian colonies. With his Battalion decimated, his fractured memory holds the only clues to the colony-wide communications blackout.

With time running out, Darren pieces together his year-long tour of duty with the Mars Occupation Force. Stationed in the Nazi-founded New Berlin colony, ruled by the brutal MARSCORP, he recounts his part in the vicious, genocidal war against the hostile alien natives and all who question Terran supremacy.

But as his memories return, Darren suspects he is at the centre of a plot spanning forty years. He has one last mission to carry out. And his alien enemies may be more human than he is…

Damien Larkin is a part-time Planning Analyst and a full-time stay-at-home father of two young children. He enjoys turning terrifying nightmares into novels and currently resides in Dublin, Ireland.