Posted May 26, 2019 by Jen in Sunday Snippet Tags: Matt Spencer, The Deschembine Trilogy

The Night and the Land 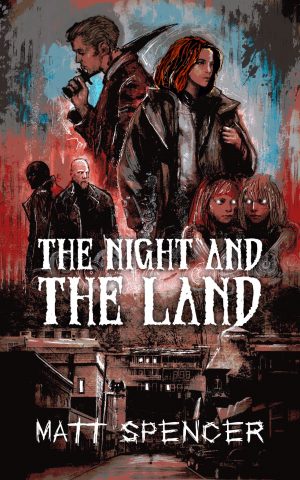 The terminal was mostly empty this late, so the information office was locked and dark. A few caffeine-fueled patrons sat around, waiting on late night connections. Cops strolled through and woke a sleeping man to see his ticket, making sure he wasn’t a vagrant. Near a connector gate, a soldier on his way back to duty stretched out and dozed, using his duffel bag as a pillow. A massive Mennonite woman in full regalia, fanning bonnet and all, changed her baby’s diaper on a table in the café. Everyone must have assumed the ticket clerk had gone home.

Had anyone peered closely through the office blinds, they’d have noticed the faint bluish glow still flickering. Had they pressed their ear to the glass, they’d have heard two soft eleven-year-old voices, one boy and one girl, interspersed with faint mutterings.

Tonight’s ticket clerk had worked the afternoon shift two days ago. Both kids wore plain clothes made from a chemically treated hemp that rarely left stray fibers behind, but from which DNA traces slid like water off a duck just in case. The soles of their leather sandals were similarly coated. You could tell they were twins by their faces, though their hair threw some people off—the boy’s fair blond, scruffy, getting longish so it hung in his eyes; the girl’s reddish brown, neatly combed, hanging midway to her waist. Tonight, she’d tied it back, out of the way of the delicate work before her. They’d exhausted their last lead—another clerk who worked here—in a gas station bathroom on his way home.

“You’re doing it all wrong.” The girl shoved the boy back, so his fingertips slid out of the slick, softening brain matter. The clerk stopped singing the Tom Petty song. Hopefully the sudden jostle hadn’t damaged the brain, screwing up the interrogation.

“Is that a one-way or round-trip ticket to Baltimore, sir?” The clerk drooled. The top of his skull had been cleanly removed, exposing his brain, which the twins now explored.

“You just got lucky,” said the girl, “found the right pathways. We gotta follow all the steps Grandpa taught us.”

With that, her fingertips pressed the same area. The clerk muttered what sounded like some kind of drill…the office’s opening procedure.

She massaged the brain some more, then leaned forward and whispered. Her fingers trailed around rhythmically, pressed harder, pressed softer, moving fast then slow. Into the clerk’s ear she described aspects of her older sister’s most basic movements, voice patterns and aura. This clerk probably couldn’t see auras, but he’d make the connection once she tapped into the right pathways. She described her sister’s present appearance, as close as she knew for sure, from a security camera still her father had tracked down half a year ago in a Detroit train station. Hopefully it was close enough to register, assuming the clerk had even seen Sally.

“It’s not working,” groaned the boy. “C’mon, Sissy; she must’ve left town some other way. We’ll talk with Mom and Dad, and we’ll figure something else out.”

Ignoring him, she spoke in a nearly perfect imitation of her older sister’s voice. “Hey, how much is a ticket to—”

She cut herself off. The man stayed silent. She repeated the same phrase several times with different inflections, then rephrased the question.

“Say, when does the next bus leave for—”

Sissy huffed. “So when’s the next bus leave headed—”

The boy’s eyes trailed to a glass-framed U.S. map. “What about the neutral states?”

Sissy winced, then paused. However she might shift or shrug the rest of her body, her fingers froze stone still in brain goo. “Didn’t you already try that?”

“Not the current ones. What was the nearest one before she ran off?”

Sissy, who prided herself as a geography and history student, bent back over the clerk. “So, will this get me to Vermont?”

When the clerk didn’t answer, she almost moved on. Then she tried other inflections.

“Where in Vermont you wanna go to, miss?”

Her fingers shifted, pressed again, and the clerk said in a rough facsimile of Sally’s voice, “Well, how far’ll it get me?”

When Sissy pressed again, he answered.

Blocks away, a black Buick sat parked in deep shadow. Within were two adults dressed identically to the children who’d just interviewed the clerk. Both were stout and stoic, the man short with white hair, the woman tall and dark-haired. Her hands stayed folded, ready to spring to the glove box for the Magnum. Since leaving the van full of dead punk kids on the roadside an hour north of here, they’d done nothing to raise any profile. From the moment that driver blubbered where he and his friends had kicked out the hitchhiker, the family knew the mindset they’d need for this. Death might have already scented out this car, might be circling slowly inward.

As the twins came ghostlike up the street, their mother’s eyes peered hard into the shadows around them. The spires of a cubic tower gashed the skyline like black glass slivers, barely passing for a simple office block to Earth-line eyes. The children’s silent poise held ’til they opened the door, then they scrambled in.

The parents exchanged looks. Vermont had been neutral territory ’til about a year ago, when a cluster of wandering Schomite kids broke truce. By the end of the skirmishes, the Crimbone had established control, and it had proved profitable for them. Of course the Schomite Cabinet insisted the original aggressors were Spirelights, and it had been the Schomites who’d managed to move in and set up their base of peace-keeping. Factoring in manpower and threat of exposure against Vermont’s loss, the Secret Police Tribunal decided to cut their losses for the foreseeable future.

“You covered your tracks like we went over, right?” asked their dad.

“Yes,” they practically sang in harmony.

Sheldon passed Dad the plastic bottle of the eroding fluid with which they’d sprayed down the body, along with anywhere else in the office where they might have left fingerprints.

“No one saw us, either,” added Sissy. “We slipped into the office in the afternoon when the guy left on his lunch break, stayed real quiet and still and out of sight, then waited ’til he locked up. Once we were done with him, we left through a side door, so no one in the lobby saw us.”

“We should get on the road,” said Mom.

Everyone nodded. Sissy and Sheldon’s work wouldn’t be discovered ’til morning, but it wasn’t the cops they were racing in this city.

“True,” said Dad, “but it shouldn’t be a problem. The only connections the Earth-line police could make any time soon would be to Indiana or Tennessee. Unless Sally’s gotten very sloppy, they won’t. Even if they do, I don’t much see how they could trace her to this…Brattleboro place.”

“They have security cameras in bus stations,” Mom noted.

“I disabled the cameras,” Sheldon said. “Then I traced the wire to where they keep the tapes, and I sprayed ’em down.”

Dad answered Mom, “Like I said, unless she’s gotten very sloppy, they won’t have an accurate facial description to match those tapes. Still, good thinking, Sheldon.”

In the back seat, Sheldon grinned.

The family drove off, silent because there was nothing to speak about—at least nothing the parents would discuss around their children, or vice versa. Sheldon saw Sissy’s scorn, like he didn’t have the right to seek Mom and Dad’s favor when he thought of something she hadn’t. Instead of punching her in the ribs, he turned and looked out the window for a while. When he glanced back, she still stared off sullenly, so he gave her a playful jab. She winced, so he persisted ’til she giggled and jabbed back at him. By and by, she got sleepy, so he gathered her ponytail and spent the next fifteen minutes weaving it into a single whip-like braid. She grew drowsier and settled back against him. Before long, they were both asleep, holding each other the way the Earth-line children hugged their teddy bears.

Soon the Buick was on the interstate, headed for Vermont.

Among the local hippies and squatters of Brattleboro, Vermont, Sally Wildfire is on the run, hiding from her cruel, relentless family. She finds unexpected love with Rob, a bristly young man freshly awoken to alien sensations and ancestral memories of a long-forgotten realm…setting them both on a collision course with a brutal rite of passage, as the Wildfire family leaves a trail of mangled corpses on the road to Brattleboro.