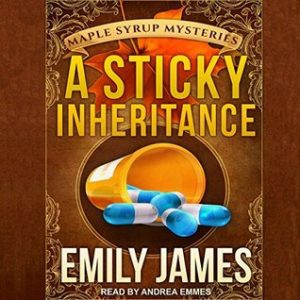 Nicole just made the long trip from Virginia to Michigan to make arrangements for her uncle’s funeral. Although she was close with her uncle, he was estranged from her parents, so she hadn’t actually visited him in years. Once she discovers the facts about his death, Nicole, who like her parents, is a criminal law attorney, recognizes that his apparent suicide was actually murder. Inheriting her uncle’s maple sugar business, Nicole not only feels she needs to solve her uncle’s murder, but she must also decide if she wants to remain in Northern Michigan and give up her law career.

A Sticky Inheritance is an enjoyable, first-in-a-series cozy mystery. I enjoyed learning about Nicole and her new residence in Northern Michigan. The mystery is well written and fun to follow. Nicole is smart and confident, but I like that she’s questioning her career and life choices. I also like the hints of romance swirling about Nicole.

Narration: The story is shared in the first person narrative of Nicole. Ms. Emmes’s voice is on the higher-end of the pitch spectrum; it sounds young, but not juvenile, and it suits the main character, who is young and driven. I was impressed with her performance of a young child. Her males are slightly more masculine: enough to notice it is a male, but still on the higher-end of the spectrum. Ms. Emmes provides enough differences to distinguish each character, but the differences aren’t over-the-top.

Overall, I feel A Sticky Inheritance is a well-done cozy. The main character is pretty smart, yet still makes mistakes. She’s sympathetic and makes friends quickly. The mystery had some excitement and danger, and it kept me guessing, although my first guess was correct.

Nicole Fitzhenry-Dawes feels like she’s the only failure amid a family of high achievers. Her last serious boyfriend turned out to be married and her career as a criminal defense attorney is in tatters. When her uncle passes away and leaves her his maple syrup farm in Northern Michigan, she thinks it might be time for a career change—hopefully one that allows her to stay as far away from murderers and liars as possible.

For half a day at least.

Her uncle’s suicide quickly begins to look like it wasn’t a suicide after all, but the chief of police is reluctant to investigate and soil the reputation of his serene little tourist town. Murder’s bad for business. Nicole has no choice but to search for the killer on her own, with a little help from the handsome county medical examiner—who’s exactly her type and all wrong for her.

And as she closes in, she not only risks becoming the murderer’s next victim but also starts to wonder if the truth is ever worse than the lie…