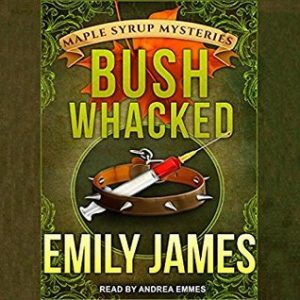 Bushwhacked opens a few months after the conclusion of the first book, to just after the winter holidays. Although it took longer for her to close out her life in Virginia, Nicole is finally heading back to Fair Haven, MI, to begin her new life. Driving in white-out conditions on her way in to town, Nicole hits a man with her car. In less than 24 hours, the police discover the man was poisoned and died before Nicole came upon him, but his death sets off a quest to discover why the local animal shelter manager was murdered, and Nicole goes undercover to help the police.

After reading Bushwhacked, I have mixed feelings about it and the Maple Syrup Mysteries series. The mysteries are enjoyable – I love the setting in my native state of Michigan and the attention to detail the author puts into her cases. The characters I’ve met so far are interesting. I mostly enjoy main character Nicole, but she’s got some flaws that bother me. The good – Nicole is kind-hearted and wants to do what’s right. I like her attitude about solving the mystery – she’s not a vigilante, but rather is a helpful citizen that happens to be in the right places at the wrong times. And Ms. Emmes does an excellent job bringing her personality to life.

While a decent cozy, Nicole is not very smart. She constantly makes bad decisions like leaving a message on the police chief’s private cell rather than calling the police station or 911 when something suspicious happens. Or leaving a puppy alone at the shelter and then going back by herself after dark when she knows someone is trying to steal the puppy. She comes up with theories and ideas, which are wrong, and then blindly sticks to them when presented with conflicting evidence, until it’s too late. However, my biggest issue is her interpersonal skills and how she is dealing with her feelings for Mark, a man she believes is married. Upon reading the first book in the series, it is pretty evident that Mark’s wife has passed away, although it is not stated outright. I understand leaving readers on the hook for one book, but now it’s gone on for two books without resolution. So instead of talking to Mark, Nicole continues on making bad assumptions, hurting both Mark and herself. She’s melodramatic at times, and it’s become ridiculous.

Narration: The story is shared in the first person narrative of Nicole. Ms. Emmes’s voice is on the higher-end of the pitch spectrum; it sounds young, but not juvenile, and it suits the main character, who is young and driven. Her males are slightly more masculine: enough to notice it is a male, but still on the higher-end of the spectrum. Ms. Emmes provides enough differences to distinguish each character, but the differences aren’t over-the-top. I really enjoy her portrayal of Nicole and enjoy her work with the story.

Overall, I was a bit disappointed with Bushwhacked even though it is a solid cozy. I want to like Nicole, but she makes foolish mistakes that seem out of character for a well-educated attorney, and the dating drama takes up too much time in this shorter novel.

My Ratings:
Story: C+
Narration: B+

Sometimes the most beautiful places hide the darkest secrets…

Former lawyer Nicole Fitzhenry-Dawes has packed up her life in Washington, D.C., to move to the tourist town of Fair Haven, Michigan, and take over the maple syrup business she inherited from her uncle.

But trouble seems to find Nicole wherever she goes.

Caught in a snow storm on her way into town, she hits what she thinks is a deer. It turns out to be the manager of the local animal shelter, and the collision isn’t the primary cause of death.

Feeling guilty anyway, Nicole convinces the interim police chief to allow her to help with the case, even though she’s also busy trying to settle in to her new role as owner of Sugarwood and figure out her unusual friendship with the county medical examiner.

As Nicole closes in on being able to put the killer behind bars, will she manage to find the evidence she needs before the murderer puts her in a cage—or a body bag—instead?