Audiobook Review: Even Tree Nymphs Get the Blues 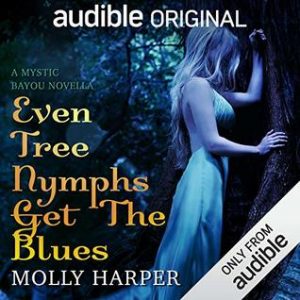 Ingrid Asher has felt the pull of the Rift for years and has finally decided to settle down Mystic Bayou. She’s going to raise cows and open her own creamery. Once hurt by a human male, costing her her place among her sister tree Nymphs, she’s leery of League scientist Rob Aspern and his attention. Rob is attracted to and inexplicably drawn to Ingrid. He knows he needs to take it slow, so when his attempts at wooing Ingrid push her further away, he doesn’t know what to do.

Even Tree Nymphs Get the Blues, a short novella in the Mystic Bayou world, is entertaining and great fun. I enjoyed the introduction of a new-to-the-world Magick (paranormal) character and learning her backstory. The focus of the story was strictly on the budding relationship between Ingrid and Eric and developing the characters, with very little on the Rift-other than reinforcement of the knowledge the problems are rapidly growing.

Ingrid is a wonderful addition to the series. She doesn’t want to socialize and doesn’t like the League. She doesn’t have great people skills because she’s isolated herself for so long. I love her first interactions with the different Mystic Bayou regulars. The romance is sweet and gentle. The conflicts that pop up are straight forward and easily solvable. And Ms Harper brings her trademark humor is in full force; I found myself chuckling out loud at times. I really liked learning more about Rob and meeting Ingrid; I hope they continue to play a roll in future titles.

Narration: As with previous books in the series, the story is shared in a dual narrative, with Amanda Ronconi (AR) reading the parts told from Ingrid’s POV and Jonathan Davis (JD) the parts shared from Rob’s POV. Overall, both did a good job, with AR’s performance slightly better than JD’s. But that gap is closing. One change for me is that I listened to the whole story at 1.5x speed, whereas in the past I changed speeds with the change in narrator. That made the experience more pleasant right off the bat. I found that JD seemed to have a greater range for his male voice this time around. I enjoyed Rob, who didn’t have a strong accent, but still loved hearing the slow drawls of the native characters (previous books). And AR did a wonderful job with Ingrid, who has a slight Norweigen accent, making her stand out over the other female characters. While I still feel the two narrators have narrative styles and voices that are a bit on the opposite ends of the spectrum, so when they perform the voices of the same characters, they sound completely different, it still works.

Ingrid Asher is the newest resident of Mystic Bayou, a tiny town hidden in the swamp where shapeshifters, vampires, witches and dragons live alongside humans.

Ingrid doesn’t ask for much. The solitary tree nymph just wants to live a quiet life running her ice-cream shop in peace. Unfortunately, she can’t seem to shake her new neighbor, Rob Aspern, head of the League’s data science department and so good looking it just isn’t fair.

If there’s one thing Ingrid doesn’t need, it’s someone poking around in her business. But the more she gets to know the hunky mathematician, the more she finds herself letting her guard down. Can she trust him with her secrets, or will her past destroy everything?