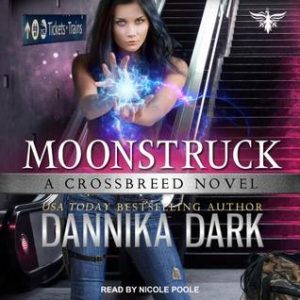 Moonstruck finds the majority of the Keystone group on a road trip transporting three human teens to safety. Why would they bother with humans? These teens are potentials, which are humans with a birthmark in the shape of a spade. They live in secret because potentials can become any breed. If the humans sleep with a breed they will become the same breed of their sexual partner. Some breeds would use that to their advantage. This first comes up in Dark’s Seven series. I love how she brings in things from her series into another. They worlds are woven into each other since they feature the same supernatural creatures.

Raven and Chrisitan continue to get to know each other and their chemistry is still smoking hot. Moonstruck has two plot lines going on and both are dangerous and fun to follow. While Moonstruck doesn’t end on a cliffhanger, there is a plot point that will need to be followed up in the next installment. There is also some buried issues I see popping up in future installments. I have some ideas and can’t wait to see if I’m right.

I’m a total fangirl when it comes to the narration work done by Nicole Poole. Poole is the reason Dark is an audio-only author for me. She masterly voices all the characters from the female to the male. She makes each character sound different and she keeps the same voice for each character for every book. I look forward to the next audiobook in the Crossbreed series.

My Ratings:
Story: A+
Narration: A+

Transporting goods is part of the job, but when Keystone accepts the daunting task of moving precious cargo, the team splits up. Raven has orders to follow, but Christian’s seductive ways draw out her violent soul. Their journey is dangerous, their enemies ruthless, and one misstep could prove fatal.

When one team member mysteriously vanishes, the rest must choose between cutting their losses in the face of chaos or seeing it through to the bitter end. Will Keystone have the fortitude to complete the mission, or will they fall like dominoes?