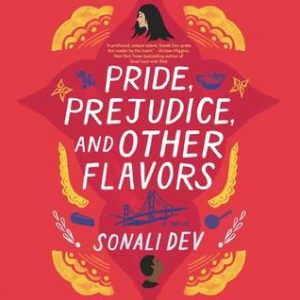 Pride, Prejudice, and Other Flavors follows Tricia, highly successful neurosurgeon and eldest daughter and of the Raje family. She’s been on the outs with her tight-knit clan for fifteen years, when a mistake in judgement lead to a horrible incident involving her up-and-coming politician brother. Instead of joining her family helping her brother’s career, she buries herself in work. However, she’s struggling with a patient who refuses life-saving surgery because she’ll go blind as a result. Meanwhile, she’s working with this patient’s brother DJ (Darcy James) on a fund-raising event for her brother’s gubernatorial campaign. Of course, they hit it off like fire and ice, each believing the other to be arrogant and hard-headed, yet Tricia cannot stop thinking about the sexy chef who makes her feel all sorts of things.

I’m going to state right up front, I’ve never read Pride and Prejudice; in fact, I’ve never read Austen. I did see the movie with Colin Firth ages ago and understand the importance of Mr. Darcy in romantic literature, but the parallels of the original were lost on me while reading Ms. Dev’s very enjoyable modern adaptation. I state this because some of the things that bothered me (a very little bit) probably wouldn’t bug those diehard readers and fans of the original.

The story is sweeping and epic, following both Tricia and DJ as they come to terms with Emma’s (DJ’s sister) prognosis and refusal to be treated as well as DJ’s job working for her family. We see two sides to every action and conversation and learn how misguided both characters can be. It’s evident that Tricia doesn’t process emotion or view the world like the majority of the population, something her family understands, but is off-putting to outsiders like DJ. Even when she tries to communicate, it just messes things up. The story is slow to evolve as we learn of the past and deal with the present in great detail. It takes time, but the reader eventually understands why Tricia is so gun-shy when it comes to trusting others, and why emotion has no place in her work. We also watch as she has that lightbulb moment when she understands why others might deal with situations differently than she.

To counterbalance this, we get DJ’s POV, and we watch as he deals with the hardships life has dealt him. His anger stems from a rough childhood, as well as being a black man dealing with the prejudices of others. He genuinely hates Tricia, but knows she can save his sister, not to mention, he needs the money from his job with her family. It isn’t until much later in the book that he begins to see how Tricia’s actions don’t mesh with his view of her. Whereas Tricia struggles with her feelings for DJ for at least half of the book, DJ didn’t feel much affection for Tricia until near the end. Normally, I don’t enjoy one-sided romances like this, but something kept me coming back until the end.

My biggest complaint about the story is the sheer size of the book. There are scenes that provide background and insight, but are either way too long, or eventually unnecessary in moving the plot forward. I think I would have given the book an A if it was a few hours shorter. The book really kicked it in for me at about the two-thirds mark.

Narration: Pride, Prejudice, and Other Flavors is shared via the third person alternating POVs of main characters Tricia and DJ, and is expertly performed by Soneela Nankani, a classically-trained actress of Indian and Ghanaian descent. She covers a multitude of accents from American, British, and varying levels of Indian. Each character is unique and distinguishable from the others. She pulls off male voices that sound masculine. And she infuses so much emotion into each character, bringing them to life and making the story come alive. I did speed the playback up to 1.75x, a bit faster than normal for me, but the narration was fluid and easy to follow.

In the end, I found Pride, Prejudice, and Other Flavors enjoyable and entertaining. I will definitely look for book two (in audio) in The Raje series.

Only in a family like the Rajes could San Francisco’s most acclaimed neurosurgeon be considered the black sheep. Dr. Trisha Raje has developed groundbreaking technology and won the respect of her peers and the life-long gratitude of her patients. Still, her large, close-knit family—descended from old Indian nobility—has certain rules to uphold. Trusting outsiders is frowned upon. Disloyalty of any kind is unacceptable. Trisha never intended to jeopardize her brother’s political aspirations, yet her long-ago actions inadvertently did just that. At last she has a chance to turn that around.

Up-and-coming chef DJ Caine has known people like Trisha before—people who judge his background and find it lacking, who put pedigree above character. He may need the lucrative, career-making job the Rajes offer, but he has little time for Trisha, especially when he learns that she’s the arrogant surgeon who wants to perform an untested procedure on his sister, Emma.

As the two continually clash, their assumptions shatter like spun sugar on one of DJ’s stunning desserts.  Drawn to DJ’s steadiness, humor, and passion—as well as his extraordinary food—Trisha begins to reexamine her view of the world, while challenging his beliefs about the nature of family. But there’s a past to be reckoned with before they can hope to savor a future bursting with delicious possibility.