Audiobook review: The Beyond 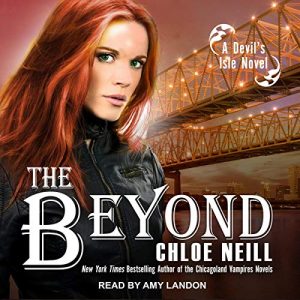 The Beyond begins about seven months after the conclusion of the third book, The Hunt. The Veil remains open and the humans have a new understanding of magic, Paras, and the Beyond. Now that she doesn’t have to hide her magic, Claire, along with Moses, works to teach new Sensitives how to rid themselves of excess magic so they don’t become Wraiths. Life has been steady and mostly calm, until the day the Seelies attack Devil’s Isle and release a dangerous prisoner. The group is determined to destroy the humans that live in New Orleans and claim the land for themselves.

The whole gang (all the key characters from the previous books) is back together, and I appreciate how each plays their part in the story. Together they are New Orleans’s only hope for stopping the Seelies. They discover a theoretic Para weapon that may help, but one of the components is in the Beyond. I did find the discovery of this powerful weapon a bit convenient – why didn’t Malachi mention it in the eight years of war?! But regardless, I love how it afforded Claire (and therefore the reader) the opportunity to visit the Beyond and learn more about what caused the war in the first place.

While I didn’t know it before I picked up The Beyond, it is Claire’s final story – the end of the Devil’s Isle series. And a fitting conclusion it is. The book has the feel of a finale, and the author provides closure and hope for the future. As I mentioned, the gang’s all here, and each had a role to fill in saving their homeland. I like that they come together in meaningful ways and not just there as window dressing. The action is exciting and the downtimes provide opportunities for characters to mature and tie up interpersonal situations.

Narration: After reading the first three books, I opted for the audio for The Beyond. The experience comes with mixed results. I didn’t realize it until I heard the narrator speak her first male voice, but I’ve listened to her before (under a different name), and I had issues with her male characters that time as well. Unfortunately, most of her male characters sound like an adolescent boy in an animated show I watched years ago, so to me, they sound cartoonish and goofy. With that, I did like her voice for Claire, who shares the story in the first person narrative. Claire’s voice is pleasant and age appropriate, and Ms. Landon does a nice job injecting emotion into Claire’s thoughts and words. At first, I had a tough time distinguishing all the characters, but overtime I was able pick out the subtle differences between each character. By the end of the book, I grew used to the voices, but I was won over because something about most of the voices just didn’t work for me.

In the end, I enjoyed my time with Claire and in Devil’s Isle and find it a good UF series. The Beyond is a solid and fitting conclusion. The author kept plot moving and tied up loose ends, and readers even get an HEA.

Sensitive Claire Connolly must journey to another world in the electrifying fourth installment of Chloe Neill’s post-apocalyptic urban fantasy series.

It’s been a year since the Veil between the human world and the world Beyond was torn apart, and war began again. Sensitive Claire Connolly and bounty hunter Liam Quinn have been helping their human and paranormal allies fight back against the ravaging invaders and save what’s left of New Orleans.

But a new enemy has arisen, more powerful than any they’ve seen before, and even Devil’s Isle cannot hold her. . .

When Claire learns of a new magical weapon–one built by paranormals themselves -she knows it could turn the tide of war. But to reach it, she and Liam will have to cross into the Beyond itself. In a world full of hostile magic and dangerous foes, she’ll have to channel the powers she once kept hidden in order to survive. New Orleans hangs in the balance, and the storm is growing closer . . .