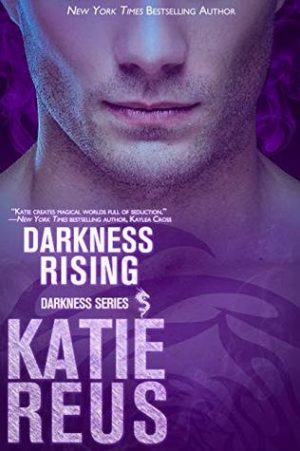 While the last book in the Darkness series, Darkness Rising turns Ms. Reus’s world of shifters and vampires on its head. I did enjoy the direction the author takes the series; however, I didn’t care for how suddenly the entire world changed. I don’t recall any indications that the series was headed in this direction in previous books, and the magnitude of these alterations is so large that it felt rushed and almost too easy. I suppose I would have preferred the final book focus more on closing out the series, although there really weren’t any outstanding plot threads from earlier titles. I was glad to see that at the conclusion of the book, the author notes she will be writing a spinoff series, because honestly, the story opened more doors than it closed.

The romance between dragon healer Greer and newly awakened ancient Reaper builds slowly over the course of the book. Reaper knows almost immediately that Greer is his mate, whereas Greer doesn’t want to be bothered with the sexy alpha male. I enjoyed the pace of the romance, which allows Reaper some time to adjust to this new world and Greer to accept the changes that mating with Reaper would have on her world. It’s a “fated mate” situation, so there doesn’t need to be a long “getting to know you” phase of the courtship, but the author does make the time.

I did have an issue with the inconstancy with which Reaper understands the modern world. The male has been asleep for at least a millennia, so he’s given a “gift” to understand modern English; however, that does not mean he understands idioms and context. At times, he’s rightly confused, not understanding the world around him. Yet at other times, he’s got no issues with technology and context. I felt it was completely out of place each time Reaper referred to Greer’s “ass” and used other more modern language.

Overall, I’ve enjoyed the Darkness series – one of the last remaining paranormal series I still read. Ms. Reus has created an interesting set of supernatural creatures, to include magnificent dragon shifters, in an exciting world. I look forward to discovering what she has in store for the future.

Series Rating: B, Liked It

When a bringer of death…

Awakened after millennia, dragon warrior Reaper is ready to fulfill his destiny…until he sees Greer. With one glimpse, everything Reaper has ever known throughout his very long life is irrevocably changed. Greer’s his mate, he feels it in his blood, in his soul—but convincing her is another matter. The dragon clan healer finds him obnoxious and annoying, but he knows a woman’s interest when he smells it. And Greer smells like one word: mine.

Meets a giver of life…

Greer has spent hundreds of years using her healing abilities for the good of others, making her the polar opposite of Reaper. The ferocious war general may be an ancient, but his arrogance proves he hasn’t spent any of that time learning about women. Greer is displeased when her Alpha sends her to New Orleans with the insufferable warrior—then she sees him in action against a menace threatening to tear the city apart. Fierce, protective, magnificent…mate-worthy. Except he’s hiding something from her. Something dark and devastating that could destroy their newly forged bond. Maybe opposites do attract, but if they want to live long enough to find out, they’ll first have to save the world teetering on the brink of obliteration.