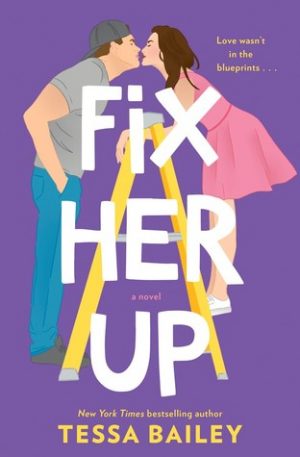 Fix Her Up
Author: Tessa Bailey
Reviewer: Jennifer
Rating: A-

Fix Her Up is the first book in Hot and Hammered series and my first time reading Tessa Bailey, and I’m glad I found her. The cover for Fix Her Up made me think I was going to get a sweet, small-town romance… I got more! Sure the setting is in a small town where a big-time baseball player, Travis Ford, comes back home after an injury takes him off the diamond forever. Sure Georgie Castle is the little sister of his best friend and seems like the girl next door. But Tessa Bailey snuck in a dirty talking hero that not only pushed all of the heroine’s buttons but this reader’s buttons too. Fix Her Up is a sweet romance with some not sweet moments of smexy times.

I’m a sucker for romance that features people getting a HEA with their childhood crushes. I also like it when the forbidden little sister/best friend romance. I got both with Fix Her Up. Georgie is the youngest of the Castle siblings and she is sick of being seen only as the baby of the family. Yeah, her job as a clown at children’s parties doesn’t help with people treating her as a kid but she’s 22 and wants to be seen as an adult. She wants to take her clown job and turn it into an entertainment company. She has a business degree and the passion to do it. She just needs the confidence.

Travis spends his first few weeks back home drunk in his apartment, feeling sorry for himself. The only person to get him out of the disgusting apartment is Georgie. She walks in on him naked, face down on his bed.

“Get out, Georgie. What the f*ck? I’m not even wearing clothes.”

“I’ve seen naked men. Tons of them.” On the internet, God bless it. “You used to be a nine point five, but you’re slowly bottoming–ha into a seven.”

“Really? Because I can feel you staring at my ass.”

“Oops. I thought that was your face.”

She gets him out of that bed by throwing food and more banter at him. Their relationship turns to friendship with Georgie still hiding the fact that she is in love with Travis. Her kid crush turns into adult love. It takes Travis a little time but he gets there with Georgie.

The two work out an agreement to fake them dating to help Travis get a job as a baseball announcer (help his shield is manwhore persona) but the faking doesn’t last long. Travis has to work through some demons from his childhood and his parents’ ugly divorce but he gets there with Georgie teaching him that he is worth a real relationship with love.

Tessa Bailey wrote a great romance with some amazing characters, including funny secondary characters, who I hope to get stories of their own. Fans of romance authors like Christina Lauren, Jill Shalvis, and Lauren Blakely will want to check out Tessa Bailey. I will keep myself busy with her backlist until the next book in the Hot and Hammered series is released in 2020.

I’m looking forward to the next book in the Hot and Hammered series, Lover Her or Lose Her which is the story of Dominic, who works for Brick & Morty and Rosie, who wants to open her own restaurant. With them being a married couple and having issues I think their story will be my jam!

Georgette Castle’s family runs the best home renovation business in town, but she picked balloons instead of blueprints and they haven’t taken her seriously since. Frankly, she’s over it. Georgie loves planning children’s birthday parties and making people laugh, just not at her own expense. She’s determined to fix herself up into a Woman of the World… whatever that means.

Phase one: new framework for her business (a website from this decade, perhaps?)

Phase two: a gut-reno on her wardrobe (fyi, leggings are pants.)

Phase three: updates to her exterior (do people still wax?)

Phase four: put herself on the market (and stop crushing on Travis Ford!)

Living her best life means facing the truth: Georgie hasn’t been on a date since, well, ever. Nobody’s asking the town clown out for a night of hot sex, that’s for sure. Maybe if people think she’s having a steamy love affair, they’ll acknowledge she’s not just the “little sister” who paints faces for a living. And who better to help demolish that image than the resident sports star and tabloid favorite?

Travis Ford was major league baseball’s hottest rookie when an injury ended his career. Now he’s flipping houses to keep busy and trying to forget his glory days. But he can’t even cross the street without someone recapping his greatest hits. Or making a joke about his… bat. And then there’s Georgie, his best friend’s sister, who is not a kid anymore. When she proposes a wild scheme—that they pretend to date, to shock her family and help him land a new job—he agrees. What’s the harm? It’s not like it’s real. But the girl Travis used to tease is now a funny, full-of-life woman and there’s nothing fake about how much he wants her…