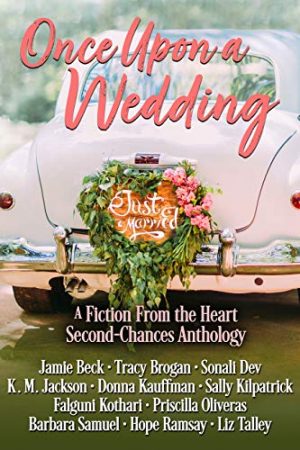 Once Upon a Wedding
Authors: see below
Reviewer: Jen

I picked up Once Upon a Wedding primarily to read K.M. Jackson’s title, but also because I LOVE second chance stories. While I didn’t have time to read all of the stories by this review date, I do plan on finishing the anthology. Here is a look at the three stories I did read.

Cruise social director Jules Monroe loves her job. She loves to make people feel welcome, but today is tough. Her soon-to-be-ex-husband, Aaron Manning-the hottest Hollywood breakout star, is a passenger on her ship. Even though they’ve been out of touch for a year, Aaron is on Jules’ ship to convince her their marriage is worth saving.

I really enjoyed this quick, happy story. It’s so clear that Aaron has always loved Jules. I like that he acknowledges her leaving and staying away was as much his fault as hers. I love that he doesn’t give up on them and shows Jules what love means to him. And the pop culture Easter eggs and references are a hoot!

Lourdes and Eduardo were childhood friends turned high school sweethearts, committed to spending their lives together until fate took Eduardo and his family to Puerto Rico. He broke Lourdes’s heart, and she turned to drugs to deal with life. Years later, Lourdes is sober and working on improving her life, while Eduardo has moved back to town. After avoiding him for a year, Lourdes can’t avoid Eduardo any longer.

This Happily-For-Now story is grounded in family and hard life lessons. I like that the author tackles the difficult issue of substance abuse in a positive and realistic manner. But it’s frustrating to see Lourdes just assume things about Eduardo (like has a girlfriend). While it’s a very REAL assumption, her reactions tell me she’s not ready for a relationship. Additionally, I feel like she’s got so much residual anger and resentment that it’s going to take time to make things work. This was a lot to tackle in a novella-length story, but it mostly works and is a good read. 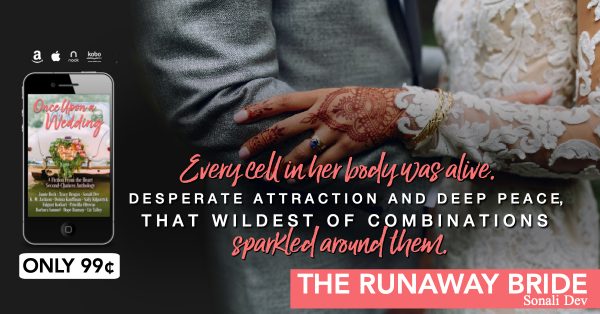 It is the night before Nisha Raje is going to marry Neel Graff, her childhood friend and forever love. But before Neel proposed to Nisha, he was committed to another who broke his heart. Nisha fears he is just settling for her; doing what his family expects him to do. And when Nisha finds out Neel met with his ex recently, the doubts cause Nisha to run.

She gives them a chance when she allows Neel five hours in the middle of the night to uncover truths and convince her they are meant to be. This time together – exposing painful fears – is beautiful and powerful. While the story only shared from Nisha’s POV, through his actions and words, we learn how much Neel loves Nisha. It brought real tears to my eyes. The author creates such honest emotion in such a short story. So well done. I’ve already gone out and purchased Pride, Prejudice, and Other Flavors, the first book in the Rajes series.

Eleven best-selling and award-winning authors request your presence as they share all-new novellas that will have you humming the wedding march and dreaming of champagne toasts. It’s easy to tie the knot with these heartwarming, second chance love stories.

I Do, Again by Jamie Beck

A makeup artist who is forced to become her bridezilla client’s eleventh-hour bridesmaid is dumbstruck to discover her ex-husband is a groomsman and he wants a second chance.

Weather or Knot by Tracy Brogan

Two meteorologists with a turbulent romantic history join a team of storm chasers and discover that love, like lightning, sometimes strikes twice.

The Runaway Bride by Sonali Dev

A groom has one night to convince his runaway bride that her fears that he’s settling for her are anything but true.

A cruise director is taken off course when the country’s hottest bachelor – and her secret husband – arrives aboard her ship for a whirlwind cruise.

A widowed blueberry farmer is reunited with her late husband’s best friend when he returns to escort her daughter down the aisle.

Snowbound in Vegas by Sally Kilpatrick

A Best Man and Maid of Honor loathe each other…until they’re stuck in a cabin meant for a honeymoon.

Embroiled in a Bollywood stunt wedding, an A-list manager is torn between doing what is right for her celebrity client or seizing a second chance with the bad boy groom herself.

With love in the air at a familia wedding, two high school sweethearts separated by their misguided mistakes just might find their second chance for a happily ever after together.

Family secrets tore them apart as teens but a wedding in Sweet Home, Virginia, may give star-crossed lovers a second chance at forgiveness and love.

Thwarted high school sweethearts meet again in the gorgeous Colorado mountains for a wedding…of their children.

A florist responsible for the break-up of the bride’s first marriage gets a chance for forgiveness and a new love with a hunky pastor.