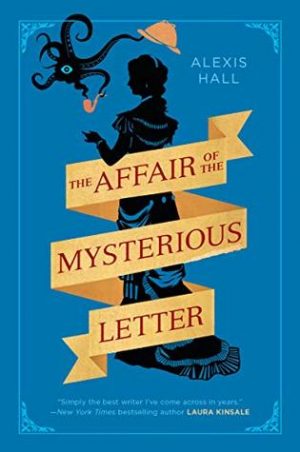 The Affair of the Mysterious Letter
Author: Alexis Hall
Reviewer: B.
Rating: A-

“I am the sorceress Shaharazad Haas. Being uninvited is sort of my thing.”

“That seems like it could get one into rather a lot of trouble.”

“Getting into rather a lot of trouble is also my thing.”

Alexis Hall is one of those rare authors whose stories I’ve found so delightful at times that beginning this newest title was like ripping open a gift from a familiar traveler: contents unknown, but sure to be magical. And The Affair of the Mysterious Letter was certainly that.

As has been the case with several other titles by this author, it was helpful to keep a variety of reference materials nearby (which I love) while reading this narrative. There’s simply so much here that I kept getting happily sidetracked. Multiple universes, sky-pirates, time travel, unknown gods, sunken kingdoms, alien creatures, opera and hypocrisy, sorcery and blasphemy, etc., are each accounted for and then some. Yet, all of this is the background for a delightful whodunit that any Sherlock Holmes fan might enjoy.

The Affair of the Mysterious Letter starts with a pertinent and retrospectively sweet forward by our narrator, Captain John Wyndham, a man of “unremarkable public reputation” who is actually entirely wonderful. After escaping his severe, religious upbringing by attending university, then being wounded in battle, he finds himself in the company of Shaharazad Haas, a sorceress of somewhat questionable character. From here, the real journey begins, thoroughly upending Captain Wyndham’s life forever—a fact he never regrets.

Shaharazad Haas, unlike the mild-tempered Wyndham, is so astonishing in every respect that she really should be experienced straight from the page. Even early in the story, I realized I didn’t need to try to empathize with her or understand her directly, but was content instead to rely on John’s footpath-following awareness. Delightfully irreverent and outwardly omniscient, Shaharazad is as singular a character as I’ve seen, and, aside from truly caring about her, John gets to be more just by being in her orbit.

With The Affair of the Mysterious Letter being a mystery, it would be both unfair and self-defeating to go into too many details in a review. Shaharazad and Wyndham each play recognizable roles in that the latter is a willing and devoted participant against whom the former can refine her hypotheses, excessive drug use and mortal danger notwithstanding. Mainly, I thought the entire exercise was just an awful lot of fun.

Something else I thought worth mentioning is that a significant part of The Affair of the Mysterious Letter is fairly dark and revolves around the fictional kingdom of Carcosa. As the entire narrative is riddled with names, creatures, and other connections to it, I feel obligated to at least mention that some readers might find Robert W. Chambers’ The King in Yellow (which is free via the Gutenberg project) of interest as secondary material.

In the end, I enjoyed The Affair of the Mysterious Letter tremendously. Nothing much in the imagination off limits, even when it flirts with madness, and the cultivated loneliness of Shaharazad was a little painful from time to time. But, there’s also plenty of humor and excitement, and romance, although I think the best of that part is so understated that it often slipped through my fingers far too quickly. The author handily gathers the threads of adventure and flings them, wide and sparkling, for us to follow, making The Affair of the Mysterious Letter one to keep.

Upon returning to the city of Khelathra-Ven after five years fighting a war in another universe, Captain John Wyndham finds himself looking for somewhere to live, and expediency forces him to take lodgings at 221b Martyrs Walk. His new housemate is Ms. Shaharazad Haas, a consulting sorceress of mercurial temperament and dark reputation.

When Ms. Haas is enlisted to solve a case of blackmail against one of her former lovers, Miss Eirene Viola, Captain Wyndham finds himself drawn into a mystery that leads him from the salons of the literary set to the drowned back-alleys of Ven and even to a prison cell in lost Carcosa. Along the way he is beset by criminals, menaced by pirates, molested by vampires, almost devoured by mad gods, and called upon to punch a shark.

But the further the companions go in pursuit of the elusive blackmailer, the more impossible the case appears. Then again, in Khelathra-Ven reality is flexible, and the impossible is Ms. Haas’ stock-in-trade.