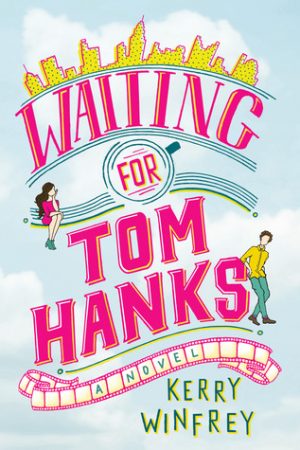 Before he was castaway on a deserted island, landed a plane on the Hudson River, or came back safely from a failed trip to the moon, Tom Hanks was the king of the romantic comedy. Anyone who loves the rom-coms of the 1990’s will love Waiting for Tom Hanks, and more importantly, will understand the 90’s pop culture references.  Tom Hanks and Meg Ryan were the “it“ couple back then. I can’t tell you how many times I’ve watched You’ve Got Mail (1998) which most people don’t know was a remake of Shop Around the Corner (1940) with Jimmy Stewart and Maureen Sullivan. Neither should be confused with Shop Girl (2005) authored by Steve Martin, although Martin had wanted Hanks to play the lead until his producer convinced Martin to take the roll himself.

Hanks was the adorable leading man who was approachable.  He personified the one you actually hoped to date in real life.  He wasn’t Chris Hemsworth hunky or Hugh Grant awkward, Hanks was cute and smart, and clearly understood what it meant to be “smitten.“ Annie Cassidy, although twenty-seven years old in Kerry Winfrey’s 2019 ode to the ‘90’s rom-com, has an obsession with Tom Hanks.  She doesn’t want the actual Tom Hanks, but that approachable perfect man he personified in her obsessive rom-com watching.  Frankly, if she were any younger, I don’t think this premise would have been believable.

Annie is cute, but closed off to even her own dreams.  She cocooned herself after the death of her parents and lives a small life, in the small neighborhood of German Village in Columbus, Ohio.  (Actually, German Village is great.  I’ve lived in Columbus and German Villiage is this little gem of great food, artsy boutiques, and theater.)  She’s also a film major so she’s trying to write her own screenplay, a romantic comedy of course, but her refuseal to leave her small world is keeping her from getting on with actually having a future.

There’s nothing new plot-wise going on here.  Hallmark is making 30,000 movies a year based on the same basic premise of the meet-cute, misunderstanding, quirky best friend smooths things over, all is forgiven, and they get together in the end with a grand gesture.  But let’s face it, Hallmark is making bank because the formula works.  We love happy endings, even when they’re predictable—maybe because they’re predictable.  Winfrey doesn’t apologize for that, but instead, digs in deeper, taking her Tom Hanks metaphor to a satisfying conclusion.

In a welcome twist, it isn’t Tom Hanks that shows up, but the metaphorical Chris Hemsworth, the hunky movie star in the character of Drew Danforth.  If I have one criticism, and it’s the reason I’m not giving this book an “A“ grade, it’s that we don’t get his point of view.  The story is told entirely from Annie’s perspective.  Because we could make a pretty good guess at what Dan was going to do next, knowing what he was thinking as he did it would have been much more satisfying.

Winfrey’s writing is good.  She has some zingers and one-liners that would play well on the big screen.  They certainly do in the imagination of the reader. “Do Ewoks even have balls?“ That’s a Big Bang worthy question. It’s up there with my favorite, “Is Elastigirl her own diaphram?“  I will definitely give Winfrey another chance in the contemporary romance category.

Annie Cassidy dreams of being the next Nora Ephron. She spends her days writing screenplays, rewatching Sleepless in Seattle, and waiting for her movie-perfect meet-cute. If she could just find her own Tom Hanks—a man who’s sweet, sensitive, and possibly owns a houseboat—her problems would disappear and her life would be perfect. But Tom Hanks is nowhere in sight.

When a movie starts filming in her neighborhood and Annie gets a job on set, it seems like a sign. Then Annie meets the lead actor, Drew Danforth, a cocky prankster who couldn’t be less like Tom Hanks if he tried. Their meet-cute is more of a meet-fail, but soon Annie finds herself sharing some classic rom-com moments with Drew. Her Tom Hanks can’t be an actor who’s leaving town in a matter of days . . . can he?