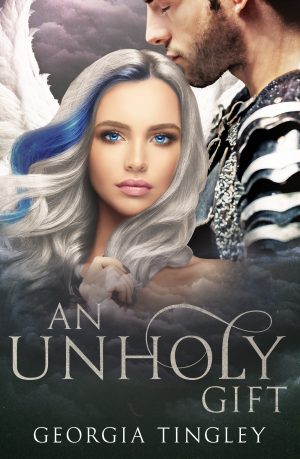 The corridor became crowded, as two uniformed policemen stepped into the cramped space. They escorted another man between them, a hand gripping each arm. Shorter than the officers, nevertheless he boldly gazed at us, a defiant expression twisting his features.

The patrolmen led him into one of the four interrogation rooms, and as they passed, we watched as the men forcibly sat him at a table with a couple of chairs. I glimpsed the two-way observation mirror when I gazed back before the door was closed.

The sheriff who had stopped a few feet down the hall, motioned to the room. “If you don’t mind, I need to get in there. Once again, thank you for your help and I look forward to working our next case together.”

He didn’t wait for our response but turned on his heel to leave. He managed only a few steps.

“Sheriff Tucker,” Caroline called for his attention. “I know it’s really not my business, but that man…” She took a step closer and spoke in a whisper so she wouldn’t be overheard. “I couldn’t read his mind.”

He raised his eyebrows in surprise, a thoughtful expression crossing his face.

I stepped closer, wanting to be included in the conversation.

“Hmm, funny you should ask. This is a missing person situation as well. However, this time his wife has disappeared. We brought him in for questioning because he failed to report it.” Tucker pulled on the skin under his chin while deciding how much to reveal.

“Can we see him?” she asked, but quickly added. “Just from the viewing room?”

“Do you think we should get involved Caroline? You were only saying how exhausted you felt,” I commented.

She turned to me, trying to send a message via telepathy but as yet, she didn’t have that ability. She could only block or read others thoughts.

I accessed her thoughts instead. I have a feeling about this guy.

I signaled my understanding with a slight nod of my head.

To the sheriff she said, “I’m getting a strange vibe with him.”

Tucker stared at her, his thoughts indecisive. “All right, Caroline. Let’s wait until he’s settled, then we can take both of you into the surveillance room. Discreetly, so our ‘person of interest’ doesn’t know we’re there.”

After the suspect had been seated and the officers had exited the room, locking it behind them, we silently entered next door. He was unable to view or hear anything; the viewing chamber being soundproof.

The officers joined us and we studied the suspect as he prowled around the cramped space. Checking out the mirror, he tried unsuccessfully to peek behind the glass.

Admiring himself instead, he finger-combed his overlong, scruffy, dark blond hair, which brushed against the collar of the pale blue shirt he wore. He looked to be in his mid to late thirties and was passably attractive. His blue eyes held an insolent air to their depths, which was an instant turn-off. He knew he was being observed and he reveled in the attention.

Purposefully he adjusted his pants, pulling at his crotch and smirking. Dark blue denim jeans hung low on his hips and backside. We glimpsed the waistband of his underpants when he pulled out the chair and slouched negligently in the seat.

“He doesn’t seem too concerned his wife is missing,” Caroline commented disgusted.

Agreeing with her assessment I said, “Smart-ass attitude rolls off him in waves.”

“Welcome to our world, ladies. We see these pieces of sh*t every day,” one of the officers beside me remarked.

Sheriff Tucker silently observed the suspect, his shrewd eyes taking it all in. “What are you picking up, Caroline?”

“Nothing yet for some reason. Everyone try to be quiet for a minute so I can concentrate.” We both stared at the seated man, putting every ounce of energy into studying him. I intensified my powers, focusing on using my brain waves to search his.

It was no use; I came up blank.

Not wanting to say it out aloud, since as far as the police were concerned Caroline was the only one who read minds, my stare voiced my unspoken words. She understood my gesture and read my mind.

I can’t read anything either. I think he has put up a barricade. My thoughts penetrated hers.

Can he do that?  Feeling confused she looked beseechingly at me.

I guess we’re gonna find out. I messaged back feeling every bit as perplexed as Caroline.

She gave me a puzzled frown.

Wishing I could give her more information, I shrugged, this was new to me too.

“I’m sorry sheriff, I can’t… I’m unable to decipher what he’s thinking. I don’t understand it myself, but he seems to be blocking me.” Caroline turned to Tucker in apology.

“Okay, no problem.” He sighed loudly. “I reckon we’ll have to do this the old fashioned way and interview him.”

The accused sat up straight in that moment. Standing, he sauntered over to the mirror and walked slowly along its length, running his finger against the cool surface. Looking into his reflection, it was almost as if he saw us behind. Which was impossible.

He had our full attention. Every person in the observation room wondering what the hell he was up to.

The man stopped in front of Caroline, a slow and deliberate smile stretching his lips. A smile so smug, I wanted to slap it off his face. Unconsciously, my fingers curled into a fist, as though I had to physically stop myself.

Suddenly his hand slammed onto the mirrored glass, making the entire wall vibrate and all of us in the room jump in surprised alarm, with Caroline clutching at her chest in fright.

With surreal fascination, I watched as Caroline, in a dreamlike state, leaned closer to the window in front of her, possibly in an effort to read his thoughts. Face to face they stared at each other, only the thin glass, a barrier between.

I watched horrified as his tongue slipped out, and he licked up along her cheek in one slow, long drag, along the mirrored surface. Caroline jerked back in outrage, and I moved to her side, wrapping a protective arm around her shoulders.

We both stared at him with a macabre magnetism when he grinned.

Then he started to sing an old Neil Diamond song.

We stiffened in shock.

Oh. My. God. I read Caroline’s mind and felt the panicky fear grip her.

How the f**k does he know my name, Asher? She turned wide, shocked eyes to me. Or that I’m even here?

When Caroline Emerson wakes up from a coma after a stroke, she feels she is going crazy, hearing voices inside her head. Caroline has been blessed with the miraculous ability to read minds! Overwhelmed by her gift and the enormity of what it means to control the cacophony of voices clamoring inside, she seeks divine assistance.

Newly converted angel, ‘Asher, the Angel of Guidance,’ is sent down to Earth to help her refine and operate her powers; teaching her to block and read minds with proficiency. They use her ‘special skill’ to help the police find missing people.

The authorities suspect foul play when a man’s wife disappears. However, Caroline and Asher are unable to read his mind; but he can read theirs! Not only can he block anyone scanning his thoughts, but he is able to control others by using his powers – a gift reserved for the supernatural.

Out of their depth, and unsure of who, or what, they are dealing with, they seek support from ‘The Angelic Counsel’. Justice Smith is called in to help.

Together the two angels discover a man who is not who he claims to be, and hidden beneath his urbane front is an evil criminal with an unholy gift.

Add to your “to read” list: GoodReads
Purchase: https://books2read.com/GeorgiaTingley2

Georgia Tingley is a new player on the author scene with her breakout novel ‘Justice’ the first book in the ‘Angel Calling’ Series.

Having lived in various countries while growing up – India, England, Canada, New Zealand and Australia she calls Western Australia home, living near some of the best beaches in Australia.

In her downtime she loves to read, read and read. Watch TV shows and movies, do crafts and get into the garden. Swimming and snorkeling are favorite pastimes and she tries to do laps at every opportunity.  She and her husband enjoy taking the caravan on trips into the Australian Outback and seeing as much of the ‘red’ country as they can.