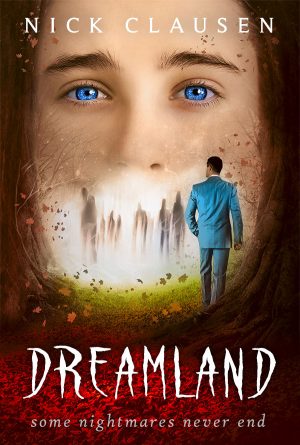 Then something strange happened; they sped up. Or rather, the surroundings sped up. For every step, Louie and his dad traveled several hundred yards. Louie felt dizzy and had to close his eyes as he held on firmly to Dad’s hand.

“We’re here,” Dad said and stopped. “You can open your eyes now.”

Louie blinked at the sight that met him. They had left town and were standing on a cornfield, the wheat smelling sweet and summerly. But not far ahead was an invisible barrier. On the other side, everything was different. The wheat lay withered on the black ground, and the sky was covered with thick grey clouds. Even the sunlight stopped at the border. Louie could sense that the air was colder on the other side; it was like looking from summer to winter. Or from day to night. No, even more than that: from dream to nightmare.

Louie gave a shudder. “I’ve seen it before,” he muttered. “At the train station. But it was so foggy, I couldn’t really see it.”

“Dreamland is merely a small part of the dreamworld,” Dad said. “All around us is this. I call it the outskirts. That’s where nightmares come from.”

Louie stared out into the wasteland and felt a growing discomfort.

“Something lives out there,” Dad went on, as his eyes searched the horizon. “Once in a while they come close enough to the border to be glimpsed. And if you listen carefully, you can hear their voices.”

Louie held his breath and listened. The silence on this side was deep and calm, only interrupted by bird song now and then. On the other side a cold wind howled.

“Can you hear them?” Dad asked.

“I can only hear the wind.” But as he said it, he realized the wind was the voices. It was a chanting choir of faint fragments; whispering, giggling, alluring.

They kept saying his name. The sound made him shiver. The voices seemed to rise and fall with the wind, but at the same time it seemed like they came from inside his head. There was something drawing, almost hypnotic about them. Louie wanted to step closer, just so he could hear them a little more clearly …

Dad’s voice pulled him back, and he looked up.

“Don’t listen anymore. If you listen for too long, you end up taking the bait. The reason I show you this is so that you can understand where the voice you heard is coming from. It’s the creatures out there who have been trying to reach you through your dreams.”

Louie stared out into the darkness and tried to see the creatures. He thought he saw a group of glowing, wavy figures in the dark. They stood side by side, twisting in a hypnotic dance. He stepped a little closer to Dad. “What do they want with me?”

“They want to drown you in bad dreams until your mind breaks down. They will try to lure you anyway they can. They will lie and tell you anything to make you follow them. And if you do …” Dad caught Louie’s eyes. “There’s no way back if they catch you.”

Louie’s mouth felt completely dry. He did his best not to listen to the voices, but they grew louder and more insistent. “But what if they get in here?” he asked. “If they cross the border and take us?”

Dad gave his shoulder a reassuring squeeze. “Don’t worry, Louie. We’re safe in here; nothing can reach us. Dreamland is our oasis of pleasant dreams.”

His smile made Louie a little less frightened.

“Come on, let’s go back,” Dad said, and they turned around.

Louie darted a last glance over his shoulder.

The voice of Dad made him startle.

Louie turned around, irritated. “What?”

“You started walking towards them.”

Louie realized he was closer to the border. The voices were louder in his ears. Although they whispered, it sounded like shouting.

Dad came and took his hand. “We’d better go together.”

Louie shook his head. “It’s not necessary. I wasn’t going there, I just wanted to …” But he didn’t know what to say.

“Come on, buddy,” Dad said softly, and they walked back across the field, hand in hand.

Louie felt a strange urge to look back, to stay and listen just a little bit longer. But Dad’s grip was firm, and the farther they went away from the outskirts, the more distant the voices grew.

Finally, Louie’s head cleared up. He realized to his terror how close he had gotten. Had he gone to the outskirts on his own, the nightmare creatures would have lured him to cross the border. He would have listened to their singing voices and walked right out into the darkness to meet them.

In his sleep, Louie starts visiting a magical world where he meets his father, who died when Louie was still a baby. But nothing turns out to be what it seems, and great horrors loom very close by …

Nick Clausen is a Danish author who began writing at the age of 18 with a promise of doing 1,000 words a day until he got a book published. He kept that promise 18 months and 13 manuscripts later. With more than 25 books published—mostly horror, fantasy and science fiction—Nick has been writing full-time since 2017 and recently started translating his books into English.