Audiobook review: A Trace of Copper 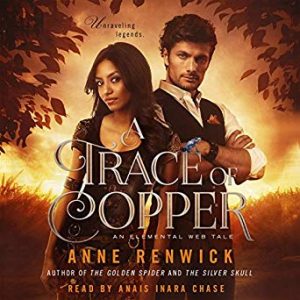 A Trace of Copper is a wonderful novella set in the Elemental Web steampunk world. It’s a standalone mystery/romance, and knowledge of the series/world is not needed. The main characters are smart and witty. Ms. Renwick’s storytelling is both intellectually stimulating as well as emotionally satisfying.

I originally read and enjoyed this novella back in January 2018, and found the newly released audiobook just as enjoyable.

Piyali and Evan remained loyal to one another for the years he was abroad and she was in medical school, and through the mystery of the blue frog, have a means to reconnect and rekindle their love story. The romance is always present in glances and small touches, but the pair would have to push aside feelings to work on the case. Yet passion can only be bottled for so long when working next to the person you love. Their love story is innocent and sweet, while the separation added a flame of heat to their romance.

Narration: A Trace of Copper is shared in the alternating POVs of Piyali and Evan. Ms. Chase presents a British accented female narrator for both the male and female parts, with dialogue altered slightly to fit the age, gender, and station of the speaker. The primary two characters’ voices aren’t very distinct from the narrator, but a mild attempt to differentiate is noticeable. Overall, Ms. Chase has a pleasing voice. She adds appropriate pauses and provides loose emotional cues. Those who’ve listened to Ms. Renwick’s Elemental Web Chronicles may notice a change in the narrator; however Ms. Chase holds her own.

A Trace of Copper brings together mystery and romance, tied together with smart writing and a few surprising twists. Solving the medical case, as well as watching all of the other pieces of the story fall into place was exciting. I so enjoy the Elemental Web world and Ms. Renwick’s writing style! I cannot wait to read (or listen to) more!

My Ratings:
Story: A-
Narration: B+

New recruit to the Queen’s agents, Dr. Piyali Mukherji is given a simple first assignment. Travel to the small Welsh village of Aberwyn and solve the mystery of a young woman’s blue skin lesion. A challenging task, for the alarming infection is unlike anything she’s seen before—and it’s spreading.

Evan Tredegar, the town’s pharmacist and the only man to ever capture her heart, knows more than he’s telling. Despite his efforts to push her away, her touch reawakens old desires. As more villagers fall victim to the strange disease, he’ll have no choice but to reveal his secrets, even if it means sacrificing his freedom.

Together they must move past broken promises, capture a rogue frog, and stop the infection before it spreads out of control.