The First Dangle and Other Stories 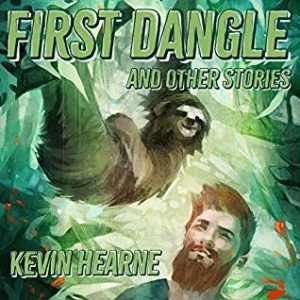 The First Dangle and Other Stories is a collection of previously published shorts and a new novella, “The First Dangle.” All but one story are set in the Iron Druid Chronicles world, some taking place before the end of the series, and others after the conclusion. Author Kevin Hearne provides his own “liner notes” before each story, giving context to the story that follows.

The Chapel Perilous is told from Atticus’s POV and set during Granuaile’s training period. Atticus shares a story of his involvement in the Holy Grail myth. It’s a “backstory” tale, with little ties to the Iron Druid stories. Overall, it was action-packed and entertaining.

The Naughtiest Cherub is told by Loki and takes place just before the events of the final book, Scourged. Loki is preparing for the start of Ragnarok, and without the bounds of Fate, he approaches the Christian devil, Lucifer, for assistance in the upcoming battles. Mr. Hearne’s sense of humor shines in this short story.

I originally read this novella in the Urban Enemies anthology in 2017.  I really enjoyed the story when I first read it (in chronological order with the overall series), and I still liked it this time around, just not as much now that the series is over. I think my knowledge of what comes after shadows the tale just a bit.

First Dangle is Mr. Hearne’s first of the Owen and Slomo story and is shared from Owen’s POV. Coriander, herald to Bree, comes to Owen with a desperate personal request. Friends of his (human witches) were murdered by something not-human, and he wants Owen to help him discover what happened.

The story set up is similar to Oberon’s tales. Owen is out to solve a mystery, and Slomo comes along providing some insight and wonder. The mystery is pretty complex and well done, although without quite as much humor as Oberon’s tales. I would definitely listen to another one!

The Waters is shared by Granuaile and takes place after the the final book. It’s just a very short look at something she’s working on now that Ragnarok is over. It’s too short to have any plot and is more of a “slice of life.”

Friendly Emily is the only tale NOT from the Iron Druid Chronicles. It is a random sci-fi short about an encounter between a human hiker and an alien who looks like a 9-year old girl. She tells him how someday her kind will come to earth to live and feed on humans.

Narration: The Iron Druid Chronicles wouldn’t be what it is without the amazing narration by Luke Daniels. A cast of dozens couldn’t do better. Mr. Daniels has honed and refined his voices over the course of the series, and I am still amazed at how many he has. From big to small, from old to young, from human to god, from sloth to dog… he captures the essence of Mr. Hearne’s characters and brings them to life. He fills each with emotion, therefore making the events that much more memorable and real.

Overall, I enjoyed The First Dangle and Other Stories. I liked the “First Dangle” story best. It is entertaining, and I liked Owen, Coriander, and Slomo working together.

Owen and his sloth, Slomo, are off to see the world when Coriander, Herald Extraordinary of the First among the Fae, interrupts to ask for the tiny favor of solving a supernatural murder. That sets the pair off on a trail that leads from Granada, Spain, to London, England and then to Austin, Texas. Owen and Slomo will have to outwit an Irish goddess of wisdom, some nasty spriggans, and streak across the Kew Gardens to find the culprit. They’re going to see the world after all—just not the way they thought.

The audiobook edition will also include a recording of “The Chapel Perilous” recorded by Luke Daniels for the first time; that story is sold separately in ebook.