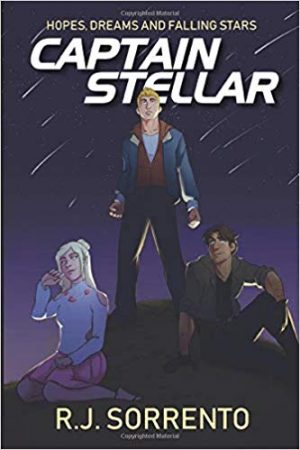 On the surface, Captain Stellar is a promising introduction to a new series by R.J. Sorrento. Filled with action and romance, it progresses along a familiar pattern of an awkward misfit who is adrift in his own life, yet is suddenly responsible for saving the world from evil. Toss in a truly disturbed nemesis and conscience-driven companion(s), and Captain Stellar has all the ingredients for a great superhero story. And while the above is true, I still some issues that I couldn’t get past.

Though his parents’ divorce left him with extensive commitment issues, twenty-two year old Cal Bolden is fairly content. His construction job allows him to pursue his dream of being a professional photographer. He also has a mother and best friend who care for him tremendously, and a boyfriend who would like nothing better than for Cal to move in permanently. It should be nearly perfect. But, of course, that’s not remotely the case.

The villain, Ted Foyle (aka “Dr. Almighty”) is one of the least sympathetic and (literally) comically twisted bad guys I’ve ever encountered. For starters, he primarily kidnaps and experiments on teenagers, turning them into either “heroes” or “villains” while establishing himself as both father figure and messiah—hence his alias. Fortunately, we’re spared anything too graphic, but it’s still horrible. His motives are also lacking in several respects. Having grown up with a brilliant mind and dismissive father, he eventually discovered how to alter human DNA in order to force supernatural powers onto his victims. Backed by extreme wealth, and driven by the derision of his peers, what he seems to want most are fame, vindication, and to turn reality into a living comic book.

As for most of the characters, I was left with the uncomfortable feeling of not really being able to connect with them. Cal, especially, seemed more petulant than sympathetic much of the time. Fernando and Margo Vazquez were engaging, but Margo’s waffling regarding the beneficence of their captor was hard to swallow. Though I believe I was supposed to sympathize with Cal over his boyfriend, Jin, I just didn’t. Cal’s best friend, Nessa, his mom and her soon-to-be fiancé, and Fernando were the real standouts for me here, and are enough to make me curious about what they might do in the next story.

Along the same lines, the things that bothered me the most about Captain Stellar were likely avoidable. There were pieces that simply didn’t add up, or that were implausible on a basic level, or were so overly convenient that I couldn’t stick with the narrative for long. Some scenes in the story raised a lot of questions for me, but it seemed clear that I was supposed to “just go with it,” rather than allow myself to ask. I don’t do that well, even if it involves people flying and throwing fireballs with their bare hands. Other issues included errors that might have been caught with additional proofreading, quite a few random POV shifts, etc. that wouldn’t have mattered as much on their own, but were harder to ignore when combined with everything else.

In summary, this was a difficult review to do. Self-publishing often takes bravery and spirit, and I have a lot of respect for most of the authors I’ve read who put their stories out there. Captain Stellar has potential to shine within the genre, despite the issues mentioned here. It’s quirky, oftentimes fun, and the author clearly has a great imagination. Those qualities can make for a solid foundation in the stories yet to come, or even if Captain Stellar should be revisited down the line. Regardless, I’d like to know what the author has in mind for the next title in the series, and will be keeping my fingers crossed.

Time to be a hero.

Cal Bolden is a college dropout working in construction and has difficulty committing to his boyfriend, Jin. On the night of a meteor shower, Cal’s life changes when a genius scientist named Dr. Almighty abducts him, giving him superpowers against his will.

Thrust into a laboratory hidden in Chicago, Cal meets Fernando and Margo, siblings with powers from Dr. Almighty. They promise to train him to reach his full potential. As Cal learns to harness his powers, he becomes attracted to his handsome and mysterious mentor, Fernando.

Caught between Jin’s concerns about his disappearance and his unexpected feelings for Fernando, Cal flees the lab for a life without superpowers. When Dr. Almighty and his team of recruits threaten to attack the city, Cal must face his fears and fight as Captain Stellar before losing the people he loves most.