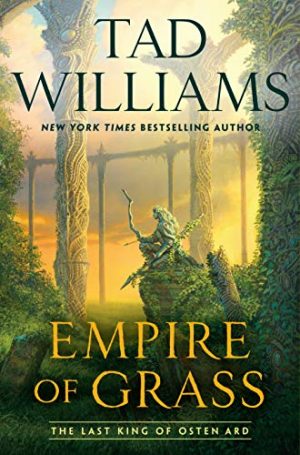 Empire of Grass, book two in The Last King of Osten Ard series, begins right where book one, The Witchwood Crown, left off.  Multiple storylines have been put in motion and Empire of Grass takes all of those storylines and escalates them.  It’s not quick read, rather you chew it slowly so you get all the juice and flavor from the imaginative descriptions.  Dragons and giants and shapeshifters—Oh My! Just like the action builds and the relationships become more complicated, Williams’s world building continues with consistency and complex imagery.

Characters too are developed along with their storylines.  All the key players, a few new ones, and some we’ve heard about before but haven’t meet until now, are all changed. Crown Prince Morgan probably undergoes the greatest change as he receives the education of experience his grandfather, King Simon, had hoped for. Although, I’m sure no grandfather would want it to come at such a high price. It was not only a relief to see Morgan leave his spoiled, whiny persona behind, but the ways in which he’s beginning to mature and change into someone you might actually want to know—someone who could possibly succeed his grandfather as high king.

Like The Witchwood Crown, there is no resolution which denotes the end of the book.  Rather each storyline hits a peak crisis and we’re left with multiple cliff-hangers. Ordinarily I’m put off by cliff-hangers, but I will admit, I’m very anxious to see how Williams is going to pull them all together in The Navigator’s Children. (Tentatively scheduled for release in Oct 2020.)  I don’t see a massive war where all the different factions converge like Tolkien’s Return of the King, but I predict that based on the skirmishes and even battles being fought throughout Empire of Grass, they will all touch before the story is complete.  I have so many questions and I’m looking foward to what will, no doubt, be an epic resolution.

The kingdoms of Osten Ard have been at peace for decades, but now, the threat of a new war grows to nightmarish proportions.

Simon and Miriamele, royal husband and wife, face danger from every side. Their allies in Hernystir have made a pact with the dreadful Queen of the Norns to allow her armies to cross into mortal lands. The ancient, powerful nation of Nabban is on the verge of bloody civil war, and the fierce nomads of the Thrithings grasslands have begun to mobilize, united by superstitious fervor and their age-old hatred of the city-dwellers. But as the countries and peoples of the High Ward bicker among themselves, battle, bloodshed, and dark magics threaten to pull civilizations to pieces. And over it all looms the mystery of the Witchwood Crown, the deadly puzzle that Simon, Miriamele, and their allies must solve if they wish to survive.

But as the kingdoms of Osten Ard are torn apart by fear and greed, a few individuals will fight for their own lives and destinies—not yet aware that the survival of everything depends on them.

Reviews in the Series:
The Witchwood Crown by Tad Williams (Last King of Osten Ard #1)