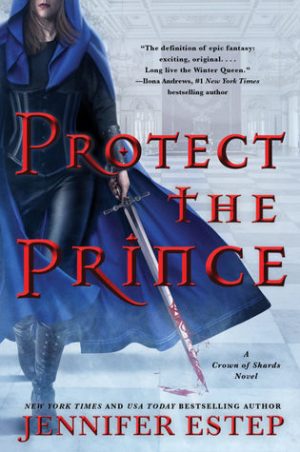 Protect the Prince is the second book in the Crown of Shards series, and as such, builds directly upon the events of the first title. The story picks up roughly three months after Evie killed the queen and took over as the ruler of Bellona. Growing up in the castle, Evie knows how to play political games, but she’s not going to bow to the pressures of the noble class. She refuses to be kind to those who were cruel to her in the past, no matter their clout.

Against the wishes of most, Evie makes the trip to Andvari in an effort to smooth the waters after her cousin (the previous queen) killed the Andvarian Prince and several other key citizens. She wants to secure an alliance against their mutual enemy, the Mortans. There she runs into more push back than anticipated, as well as a number of assassination attempts.

Overall, I found Protect the Prince exciting and entertaining. The character development, especially the progression of Evie’s comfort levels of being queen and understanding her magic, gives the story heart. Over the course of the story, I came to like Evie more and more. She didn’t come across as young as she did in the first book, but definitely still green and uncertain as a new queen should be. She is extremely talented and intuitive (for the most part), and watching her grow into herself was fun.

There is plenty of action and excitement over the course of Protect the Prince. The book is split into three parts: one for each assassination attempt on Evie. With each attempt comes knowledge and experience, making Evie better, stronger. While the book begins slowly, the second half more than makes up for it. There are threads that could have been edited out – my assumption is the author is setting the stage for the third book. I also felt the plot around who is the spy was pretty obvious, and Evie should have been a bit more on her game.

While this is a fantasy, there is a romantic thread; however, it took me time to buy into Evie’s feelings for Lucas. During the first book and start of this one, I didn’t “feel” their attraction; rather it was told to me as fact and it didn’t do anything for me. However, as the story progressed, I began to believe in the romance and wanted the couple to find a way to be together.

In the end, Protect the Prince is solid sophomore story. I liked it more than the first and look forward to finding out what happens between Evie and her fight with Maeven and the Mortans.

Everleigh Blair might be the new gladiator queen of Bellona, but her problems are far from over.

First, Evie has to deal with a court full of arrogant, demanding nobles, all of whom want to get their greedy hands on her crown. As if that wasn’t bad enough, an assassin tries to kill Evie in her own throne room.

Despite the dangers, Evie goes ahead with a scheduled trip to the neighboring kingdom of Andvari in order to secure a desperately needed alliance. But complicating matters is the stubborn Andvarian king, who wants to punish Evie for the deaths of his countrymen during the Seven Spire massacre.

But dark forces are at work inside the Andvarian palace, and Evie soon realizes that no one is safe. Worse, Evie’s immunity to magic starts acting in strange, unexpected ways, which makes her wonder whether she is truly strong enough to be a Winter Queen.

But Evie’s magic, life, and crown aren’t the only things in danger—so is her heart, thanks to Lucas Sullivan, the Andvarian king’s bastard son and Evie’s . . . well, Evie isn’t quite sure what Sullivan is to her.

Reviews in the Series:
Kill the Queen by Jennifer Estep (Crown of Shards #1)