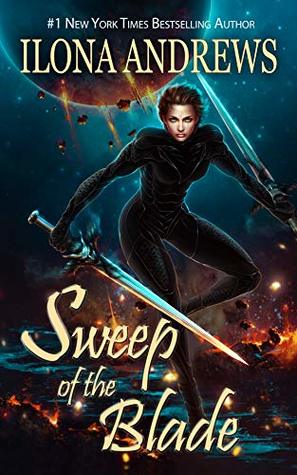 Sweep of the Blade is another exciting tale from the Innkeeper Chronicles. Set in the same world as the previous books, the book has a bit different feel than the first three titles. First, the story follows Maud, as opposed to her sister to Dina, Innkeeper on Earth. Second, this book takes place completely off Earth and away from the world of the Inns.

Readers met Maud in the third Innkeeper book when she and her daughter, Helen, were rescued from exile on a barren vampire planet. Maud (and Helen) caught the eye of powerful vampire Marshal, Arland, and although she loves Arland, Maud refuses his marriage proposal. Yet she travels with him across space to his home planet, ready to fight for her daughter’s place among the vampires.

As mentioned, the story takes place completely off Earth, among the vampires. Maud and Helen are both warriors, having honed their skills while in exile. For those familiar with the authors’ Kate Daniels series, Sweep of the Blade felt a bit like Kate and Curran, rather than the previous books in the series. Sweep of the Blade features two strong, warrior leads and a standalone romance, complete with an HEA. I loved learning more about the vampire race, including history and house structure. The vampires’ subtle political maneuverings and Maud’s heightened awareness of the vampires’ games provided suspense and intrigue.

While an exciting adventure in its own right, Sweep of the Blade is Maud’s journey in overcoming the scars from her past and learning to be herself again. Seeing Maud overcome her fears of being abandoned again was fantastic. Arland is so perfect for her. He has a soft interior and gives her such love and dedication. Sweep of the Blade twists the growing relationship of Maud and Arland around an impending attack on House Kraur. The story is a perfect mix of romance and action.

Sweep of the Blade is filled with subtle humor, rich world building, intricate details, and tight plot. I absolutely love the Innkeeper Chronicles. The writing team of Ilona Andrews has created an utterly unique and completely fascinating world, and I pray they are able to continue giving us stories.

Maud Demille is a daughter of Innkeepers—a special group who provide ‘lodging’ to other-planetary visitors—so she knows that a simple life isn’t in the cards. But even Maud could never have anticipated what Fate would throw at her.

Once a wife to a powerful vampire knight, Maud and her young daughter, Helen, were exiled with him for his treachery to the desolate, savage planet of Karhari. Karhari killed her husband, and Maud—completely abandoned by his family—has spent over a year avenging his debts. Rescued by her sister Dina, she’s sworn off all things vampire.

Except… In helping Dina save the world, she met Arland, the Marshal of House Krahr, one of the most powerful vampire houses. One thing led to another and he asked for her hand in marriage. She declined. Arland is not used to hearing the word ‘no;’ and try as she might, Maud can’t just walk away from Arland. It doesn’t help that being human is a lot harder for Maud than being a vampire.

To sort it all out, she accepts his invitation to visit his home planet. House Krahr is extremely influential and Maud knows that a woman—a human, with a very questionable past—who’s turned down a proposal from its most beloved son won’t get a warm reception. Maybe she’s not sure about marrying Arland, but House Krahr isn’t going to decide for her. Maud Demille has never run from a fight, and House Krahr will soon discover that there’s a lot more to Maud than they’re expecting.