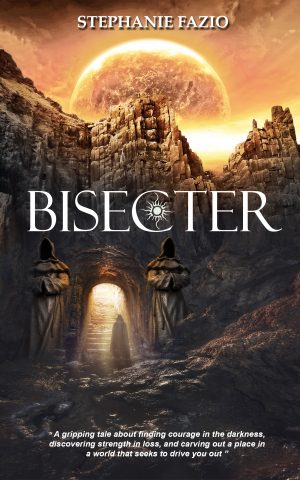 A faint rumbling makes me open my eyes. At first, I think it might be the drums beating out a message for the whole Subterrane to hear. But the vibrations aren’t those of the drumbeats.

It isn’t until the support pillars lining the cave begin to tremble that I understand what is happening. The cave, with seven layers’ worth of pressure sitting on top of it, is collapsing.

I fly to my feet as the walls of the cave begin to shudder.

Dirt rains down on my head and into my eyes. Panic squeezes against my throat, choking me as the dust finds its way into my lungs. The pillars that support the tunnel shake again. One by one, their solid foundations begin to crumble.

I’m fast, but my legs are weighed down by grief and fear. There’s already rubble blocking the tunnel out of the cave, and I have to claw my way through the dirt and stones to make a path. In a few more seconds, I’ll be trapped down here, buried underneath seven levels of caves and tunnels.

My screams are drowned out by the sound of debris filling the path. My vision is blurred from the sting of bits of stone.

“Help! Someone help me!”

But there’s no one to hear me. I’m alone.

My lungs scream as I choke on the stale air. Sweat streams down my back, pressing my thick cloak even more tightly to my body. A buzzing sound fills my head. I can’t breathe.

There are too many rocks. The tunnel is impassable, and I’m trapped.

My shaking limbs betray me and I fall to the ground. Two slabs of fallen rock balanced against each other are all that shield me from being completely buried.

The rocks stop falling…for the moment. It won’t be long before they start again. My body is wracked with shivers in spite of the suffocating heat. How much longer until my air runs out?

My heart stops at the sound of muffled voices above me. A giddiness takes hold of me as hope surges in my chest.

Rock dust catches in my throat. I double over as far as the cramped space will allow, coughing.

“Please,” I try to yell, but the coughing has stolen my voice.

“Pillar must have broken and caused a chain reaction,” a voice says from above. “The whole tunnel’s caved in. Do you think anyone’s down there?”

No matter how hard I try to scream, I can’t manage anything above a whisper.

“Hemera Harkibel was down there.”

The same voice continues, “The Bisecter.” The hatred in this word is like a punch to my already aching gut. “Leave her.”

Acid surges up through my throat. Leave me? They couldn’t….

“She’s my best friend. You help her right this instant or I’ll go down there and get her myself!”

Destinel. Even with all the dirt and stone between us, I know her voice.

“Get the kid out of here,” a voice says.

I hear screaming as Destinel is dragged away.

“Destinel’s right. We can’t let her die regardless of what she is,” someone else argues.

“We might be caught in another cave-in ourselves if we try to save her,” a high-pitched female voice cuts through the others.

“If we save her, we’ll put the entire Subterrane in danger. Let nature take its course.”

No! They can’t just leave me down here to die.

My father would make them rescue me if he was here. If my mother was alive….

Dirt slides down the wall and into my precarious shelter. I cover my face with shaking hands. There is nowhere else for me to go. I’m being buried alive.

“High day’s coming,” someone says. “We’ll send messengers to the Captain and figure out how to clean up this mess later. In the meantime, section off the tunnel so the rest of the Subterrane doesn’t get taken down, too.”

Hysteria edges in all around me. I squeeze my eyes shut, but the darkness behind my eyelids makes me feel like I’m falling.

I will die here.

My eyes snap open at the sound of moving rocks. My cheeks burn as the salt from my tears mixes with the cuts on my face. I wrap my hands around my knees and brace myself for the crush of stones. But the ceiling doesn’t collapse.

There is scuffling above me, as though stones are being moved one by one.

“One more big one,” the voice calls down, less muffled than it had been before.

There is more movement above me, and then the ceiling begins to collapse.

“Hurry!” Brice yells as he scales down the tumbling rocks and grasps my outstretched hand.

The strongest of them all. Eyes blacker than the darkness they all fantasize about, but have never seen. An abomination.

Hemera Harkibel has spent her life concealing abilities she doesn’t fully understand. She is hated and feared because of her black eyes and inhuman strength—mutations she bears from a near-death encounter with the grotesque creatures known as Halves.

When her people’s underground cave system is attacked, Hemera is thrust above ground into a dangerous world where the sun’s rays can kill in seconds and enemies are tracking her every move.

The farther she travels, the more she discovers about her powers. Hemera comes to learn that her very existence is a threat in the war brewing between humans and Halves.

Should she disappear into the shadows to protect the people she cares about most, or embrace the strength she has spent a lifetime suppressing? Her choices will threaten the survival of the world as she knows it.

This action-filled novel is perfect for fans of Red Queen, Throne of Glass, and The Mortal Instruments. If you love fantasy, don’t miss this story about wonder and adventure, love and sacrifice, heroes and monsters, and the blurred spaces in between.