Audiobook Review: Brazen and the Beast 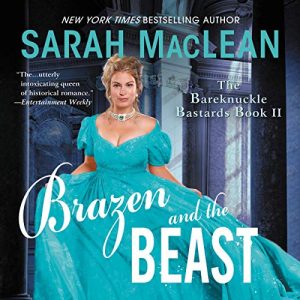 After enjoying the second novel The Bareknuckle Bastards series, Brazen and the Beast I’m officially a fan of Sarah MacLean. I enjoy her voice and the characters she pens. I plan on reading and/or listening to her backlist while I wait for the next release in the series.

I think the series should be renamed to The Bareknuckle Bastards and the Old Maid Virgins They Love. Hatti like the heroine in the previous book is in her late twenties (turning 29 to be exact) and because of the time period she is considered to be an old maid because she has not been married. Hatti doesn’t want the life society tells her she should have. Marriage and a family with her husband running a business. She wants to run her own business and she knows the only way to do so is to ruin her reputation by getting rid of her virginity. If she does so no respectable gentlemen will want to marry her.

Hatti mets Whit aka Beast the night she decided to go to a brothel that caters to females. Someone threw an unconscious Whit into her carriage. She believes him to be the most beautiful man she has ever seen. They share a kiss before she pushes him out of the moving carriage.

Whit cannot believe Hatti is not afraid of him like everyone else. She pushes all his buttons but he knows she is not for him. He believes she is too good for him and that if he were to go after her, it would put her in danger from his brother Ewan.

Hatti and Beast make an agreement that he will help her with business plan and the plan to her ruination. As the two dances around their attraction, they come to love each other. Watching them overcome their issues and find a HEA was very enjoyable. The banter was fun, the chemistry was very sexy and there was a touch of action and danger to round out Brazen and the Beast into a perfect romance.

Justine Eyre continues to delight my ears with her narration job on The Bareknuckle Bastards series. She does an amazing job switching from female to male characters. Justine is one of the few female narrators who can easily do a sexy male voice without sounding forced. She is the reason I used an Audible credit on release day even though I had an eARC of Brazen and the Beast.

When Lady Henrietta Sedley declares her twenty-ninth year her own, she has plans to inherit her father’s business, to make her own fortune, and to live her own life. But first, she intends to experience a taste of the pleasure she’ll forgo as a confirmed spinster. Everything is going perfectly…until she discovers the most beautiful man she’s ever seen tied up in her carriage and threatening to ruin the Year of Hattie before it’s even begun.

When he wakes in a carriage at Hattie’s feet, Whit, a king of Covent Garden known to all the world as Beast, can’t help but wonder about the strange woman who frees him—especially when he discovers she’s headed for a night of pleasure . . . on his turf. He is more than happy to offer Hattie all she desires…for a price.

Soon, Hattie and Whit find themselves rivals in business and pleasure. She won’t give up her plans; he won’t give up his power . . . and neither of them sees that if they’re not careful, they’ll have no choice but to give up everything . . . including their hearts.