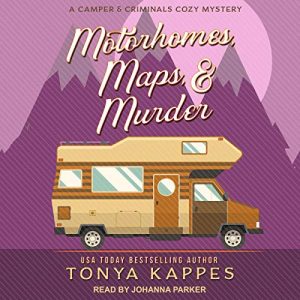 Picking up a few months after previous book and roughly ten months since Mae moved to Kentucky, our story opens with the denizens of Normal preparing for a big re-enactment, headed by local jazzericize instructor, Queenie. She’s determined to make the whole event perfect, even though there is an escaped prisoner who threatened to kill the jury who convicted him running loose in Daniel Boone National Park. Add to that a stolen RV from Mae’s campground (and the threat of a lawsuit), and you have an average day in Normal, KY.

Motorhomes, Maps, & Murder is another exciting tale in the Camper and Criminals Cozy Mystery series. One could enjoy it as a standalone story, as the author does a great job reintroducing the characters with each book; however, fans of the series will enjoy it most due to the connections made with the town and characters over time.

The story in this one is two pronged – first, how did Greaser escape prison and who is helping him, and second, who stole the RV. The primary mystery is a little convoluted and while it all makes sense, I was a bit disappointed in the direction it took, changing the nature of one characters too much for my liking. I felt it was a bit out of left field and an easy way to wrap up the plot. The secondary mystery was an unnecessary distraction, that again, wrapped up way too easily for the intensity it was given during the book. With that said, I still enjoy Mae, the Laundry Club, and the budding romance between Mae and local detective Hank. The cozy nature of the town and characters keeps me coming back.

Narration: I’ve come to love Ms. Parker’s southern drawl and how it adds ambiance to these stories. The series is shared from Mae’s first person narrative, and Ms. Parker’s voice fits Mae’s personality: friendly, courageous, and determined. Overall, Ms. Parker fits the southern, small-town feel and pacing of the narrative. Each character has a slightly different voice fitting his/her age and gender, with her male and older women characters having deeper voices.

While Motorhomes, Maps, & Murder wasn’t my favorite story of the series, I’ll continue to come back to Normal, KY, because of the characters and southern charm of Ms. Parker’s narration.

My Ratings:
Story: B-
Narration: A

Mae West, owner of Happy Trails Campground, never thought she would become an actress like her namesake. Calling herself an actress might be far stretch as she plays a minor role in the local Civil War reenactment BATTLE AT CAMP WILDCAT.

When the reenactment doesn’t go as planned, not one but two of the town’s folks aren’t playing dead. . .they were MURDERED!

Come to find out there was a prison break and the serial killer is believed to be in Normal and someone has stolen a motorhome from Happy Trails Campground.

Mae lets boyfriend and hunky detective, Hank Sharp, follow all the leads about the murders and on the trail of the serial killer because she’s got bigger s’mores in the fire.

The motorhome owners have filed a lawsuit and suing her for the deed to Happy Trails Campground. Mae has embraced Normal and there’s nothing or no one going to take her campground. She’s determined to find the motorhome and return it to the owners before she hands over any deed to anyone.

Mae just might find out that tapping into her namesake just might come in handy when coming face to face with a serial killer.