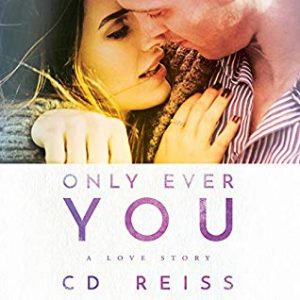 I’m a big fan of CD Reiss and will jump on anything she writes. She can pen both dark/touching stories and fun/light stories, and they are all sexy. Only Ever You was on the lighter side of her romances, about two friends from school who fell out of touch after high school.

Sebastian was a skinny, geeky guy in school with a huge crush on his best friend Rachel. She was always taking up for him when the bullies bothered him. They did everything together. Then they went their separate ways to go to college. They both came home for different holidays and breaks, always missing each other, but their families keep them in the loop with news of the other one.

After nearly fourteen years apart, Racheal and Sebastian came home for the same Christmas. Sebastian made sure of it. They were both thirty and they had made a pack in high school if neither of them was married by thirty they would get married. Their parents found out about it and assumed they were getting together to start their engagement.

Since Sebastian has been in love with Rachel since they were kids, he was all for it, but Rachel thought it was a funny joke. Until she found chemo medication bottle in her parents’ trash. She was afraid her mom’s cancer was back and thought she was pushing her to be “settled” before she died from cancer. This worry pushes Rachel into asking Sebastian for the huge favor of faking their engagement to make her mom happy. They figured once her mom went through treatment and was better they would call off the engagement.

Of course, they had to make it look good and started “dating.” One thing led to another and they started to really date. There was a family drama and half-truths, but by the end of Only Ever You, Rachel and Sebastian got their long-awaited HEA that everyone in their lives saw coming but them.

Only Ever You is told through changing POVs with Andi Arndt narrating Rachel and Brian Pallino narrating Sebastian. I’ve enjoyed many titles narrated by Andi Arndt. She does quality performances and is on my shortlist of narrators who will draw me to a title no matter who the author is. She does a great job bring Rachel to life and her deliverance is always the right mix of pacing and emotion. Brian Pallino is a fairly new narrator for me. His voice sounded familiar so I looked him up and I have heard him before. Now I can say I will actively seek out his narration work. He did an amazing job narrating Sebastian’s POV.

If you are a fan of a second chance, fake finance and best friends to lovers romances you will get all of these tropes in Only Ever You. I highly recommend enjoying it via audiobook format.

Rachel knew exactly what turning thirty would be like. She had a plan, after all. First college, then a climb up the professional ladder. Love, marriage, children. All of it was on the schedule.

The cheap Hollywood apartment wasn’t on the list. Neither was the string of heartbreaks. Or the effect her mother’s cancer had on her career.

It’s hard to stay practical and on point when everything takes a left turn.

Enter Sebastian, the nerd across the street. The boy she defended when he couldn’t defend himself. The best friend she promised she’d marry if life didn’t go according to plan.

Not only is he successful, confident, and gorgeous, but he also still has their handwritten marriage contract.

No one goes through with childhood wedding pacts.

But their families might just be crazy enough to rent a hall and set a date. All Rachel and Sebastian have to do is fall in love.