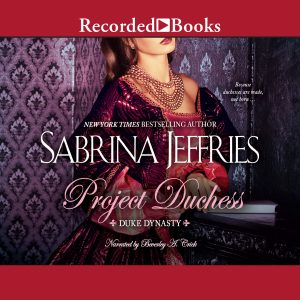 The Duke Dynasty is a new historical romance series about a dowager duchess who was married and widowed by three different dukes. She has five grown children – three are dukes themselves. Project Duchess, the first book, is about the eldest son, Fletcher, aka Grey. The book opens with news of the death of his stepfather, his mother’s third husband. He leaves immediately to be with his mother, even though he is slightly estranged from his mother and siblings. He is more interested in property and forwarding his dukedom than mending fences or finding a wife.

I was immediately pulled into the story as I learned more about the entire family through their interactions. First, I love the fact that there are three dukes in one family! But there is an uneasiness between Grey and his family which provides conflict and fodder for an engrossing tale. While Grey is the focus of the book, every supporting character is fascinating, each member of the family has his/her own secrets and stories. I cannot wait to hear every one of them.

Beatrice, the cousin of Grey’s youngest brother (niece of the recently deceased duke), was orphaned at a young age, similar to Grey. She believes the rumors that Grey is a bit of a rake and an arrogant know-it-all to boot. She’s determined not to like him, but she cannot deny her attraction. Meanwhile, Grey enjoys Beatrice’s open nature and feistiness, finding her attitude a refreshing change from the typical society female. He knows he cannot marry her, yet he cannot seem to stay away from nor stop pursuing Beatrice.

I love how head-strong Beatrice is and that she doesn’t conform to societal expectations. Both Beatrice and Grey are so much the same – deeply lonely, hurt by those meant to protect them, and share a strong attraction from the start, which leads them to do and say things they wouldn’t normally do/say – leading to camaraderie. But the lack of trust and quick to speak has them saying stupid things! Their romance is a series of semi-misunderstandings and bad assumptions about the other. Luckily their overwhelming desire allows them to forgive and move forward.

In addition to the wonderful romance, there is a mystery to solve. Grey’s youngest brother Sheridan believes his father, and the duke before him (his uncle) were murdered, with the primary suspect being Beatrice’s brother. The more Grey, Beatrice, and Sheridan dig into the matter, the more it does look like foul play. While the story is a standalone romance, I like that the murder mystery is going to be an overarching plot line.

Narration: The story alternates between Beatrice and Grey’s third person POVs, and Beverley A. Crick does a wonderful job. She has a delightful British female narrator for both Beatrice and Grey’s POVs. The dialogue is adjusted slightly based on gender, age, and station. Her female voices all light but slightly different. Her males are deeper and convincingly masculine. The accents appropriate for the setting and period. Ms. Crick also provides excellent emotion for the two main characters. She has the tremble in her voice of a woman on the verge of tears, and the anger and frustration of a man who cannot get the woman he fancies to understand his feelings.

Project Duchess is light and fun, but exciting and sexy. I really enjoyed this first book, signaling promise that the Duke Dynasty series will be a good one.

My Ratings:
Story: A-
Narration: B+

A series of stepfathers and a difficult childhood have left Fletcher “Grey” Pryde, 5th Duke of Greycourt, with a guarded heart, enviable wealth, and the undeserved reputation of a rogue. Grey’s focus on expanding his dukedom allows him little time to find a wife. But when his mother is widowed yet again and he meets the charmingly unconventional woman managing his stepfather’s funeral, he’s shocked to discover how much they have in common. Still, Grey isn’t interested in love, no matter how pretty, or delightfully outspoken, the lady. Beatrice Wolfe gave up on romance long ago, and the arrogant Duke of Greycourt with his rakish reputation isn’t exactly changing her mind. Then Grey agrees to assist his grief-stricken mother with her latest “project”: schooling spirited, unfashionable Beatrice for her debut.

Now that Beatrice is seeing through Grey’s charms to his wounded heart, she’s having trouble keeping him at arm’s length. But once Grey starts digging into her family’s secrets, she must decide whether her loyalties lie with her family . . . or with the man whose lessons capture her heart.