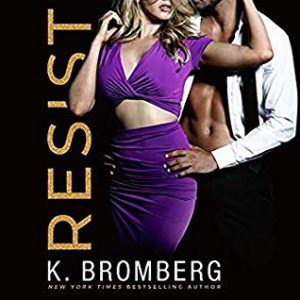 Resist is my second attempt to enjoy a K. Bromberg novel. Sadly I DNF my first novel, Driven, by the author. (I did watch the movie that Passionflix did base on the book and enjoyed it enough) I think I didn’t connect with the characters when I tried to listen.

Resist is a romance between a wealthy divorce attorney, Ryker, and Vaugh, the owner of an escort service. Vaugh is the “madam” with a heart of cold.

Vaugh has a dark family past that leads to her older sister taking her own life, leaving behind her special needs daughter, Lucy. Vaugh is doing everything she can to get custody of Lucy, but she has a mountain of debt she’s trying to pay off from putting her sister in rehabs. Which is the only reason she has started Wicked Ways. To make money fast to get debt-free in hopes it will help her custody case. Of course, she has to have a ‘day job’ to explain money coming into the caseworker. So she works at an upscale night club as a waitress.

She never dates the Wicked Ways clients, she does manage the girls. But one girl was bruised up by a client and wasn’t able to escort Ryker to an event leaving Vaugh to step in as Saxton, a different girl working for Wicked Ways. She has to keep her real name and identity secret so it doesn’t hurt her chances to get custody of Lucy.

Resist is a sexier version of Pretty Woman with more depth and complexations. Ryker and Vaugh’s story continues with the second novel in the Wicked Ways series, Reveal and I’ve already downloaded it from Netgalley. I want to listen to the audio but that ending has me needing to know what happens next, NOW.

Erin Mallon and Jason Clarke are the reasons I decided to give Resist a try. Erin is one of my favorite narrators in the Contemporary Romance genre. She does a great job with male voices! Her change from female to male sounds like two different narrators. She makes the female characters sound strong and feminine and the male characters husky and sexy.

My Ratings:
Story: B+
Narration: A

Who says you have to play by the rules to get what you want?

Agreeing to meet Ryker Lockhart is my first mistake. Rich, handsome, and more than intriguing, he thinks blackmail will bend me to his will.

I may have done a few things that weren’t exactly legal, but I have my own reasons for that. The last thing I’m going to do is let some high-powered divorce attorney come into my life, have my body, and rule my heart. Not to mention ruin everything that I have carefully built in just a short amount of time.

But as much as I try to resist him, and against my better judgment, there is something about him that has me agreeing to his proposal.

I’m putting everything on the line for him. I just hope I won’t lose everything when this is all over.