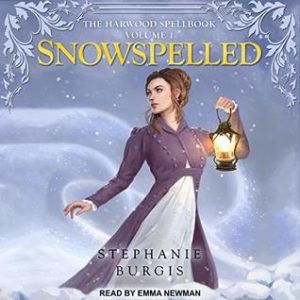 Note: The audiobook edition of Snowspelled includes the prequel novella, Spellswept. I include reviews for both, below.

Spellswept is the prequel to the Harwood Spellbook series. It is shared in the third person POV of Amy. The world is an alternate dimension/timeline fantasy Angland where men have magic abilities and women are shrewd politicians. Amy, an orphan, earned a prestigious position as the assistant to Miranda Harwood, a powerful member of the ruling Boudiccate. Amy adores her mentor and her two children. She’s even a bit smitten with Jonathan, but in order to pursue her political ambitions, she must marry a mage, and Jonathan broke with tradition and refuses to study magic.

Spellswept provides a wonderful start to a promising series. I love how the author builds her world, giving listeners insight into the rules while introducing and developing the characters. It’s subtle and effective. I also enjoy the slow burn revelations of feelings between Amy and Jonathan. The story is the perfect blend of coming-of-age and romance. We witness Amy make life decisions over the course of a single night, and the romance is very much part of that without being the only thing.

In the end, I throughly enjoyed Spellswept, brought to life by Emma Newman’s performance. I look forward to hearing more tales set in this interesting fantasy world.

Picking up about a decade or more after the events in Spellswept, this story belongs to Cassandra, the first female mage. We learned of her outing as a mage in the prequel. Told from the first person POV of Cassandra, we discover that something happened a few months prior to the start of the book that caused her to lose the ability to wield magic, which also lead to the breaking of her long-standing engagement to Rexum. Now Cassandra finds herself a pawn in a dangerous game between the residents of Angland and those in the elven realm.

Similar to the prequel novella, Snowspelled is first and foremost, Cassandra’s journey as she comes into her own after dealing with a life-changing setback. We witness her journey going from despair over losing the magic, which she felt defined her, to acceptance and embracing change and the future, acknowledging all the positives and faults. And the romance is part of it. It’s a second chance tale for two people who already share a deep bond. I like how the pair find their way back together after finally talking about all the changes and what they mean to the pair.

The catalyst for Cassandra’s story is the promise she makes to help a troll. Unbeknownst to her, there is unrest in the elven kingdom, and Cassandra just happened to be in the wrong place at the wrong time. I enjoyed watching Cassandra and Rexum work together and liked the clever way Cassandra had to puzzle out the problem.

In the end, I quite enjoyed listening to Snowspelled, a delightful historical fantasy romance. I loved witnessing Cassandra as she learns to accept all she has, both plus and minus, to finally come into her own.

Emma Newman provides the sublime narration for the story. Her crisp British accent is suitable for the location and setting, but also the genre; there is something about a British accent that brings to life a good fantasy. She uses a clear, female voice for the narrator and main characters Amy (Spellswept) and Cassandra (Snowspelled), altering the dialogue for each character. She adds just enough emotion to benefit the story without overwhelming it. Her male voices are slightly deeper, and she also alters her voices appropriately based on the age of the character.

Review copy provided by the author

In the world of the Harwood Spellbook, 19th-century Angland is ruled by a powerful group of women known as the Boudiccate – but in order to become a member of that elite group, any ambitious young politician must satisfy tradition by taking a gentleman mage for her husband.

Amy Standish is a born politician…but Jonathan Harwood is her greatest temptation. On the night of the Harwoods’ Spring Solstice Ball, in an underwater ballroom full of sparkling fey lights and danger, Amy will have to fight the greatest political battle of her life to win a family and a future that she could never have imagined.

It will take an entirely unexpected kind of magic to keep everything from crashing down around her.

Four months ago, Cassandra Harwood was the first woman magician in Angland, and she was betrothed to the brilliant, intense love of her life.

Now Cassandra is trapped in a snowbound house party deep in the elven dales, surrounded by bickering gentleman magicians, manipulative lady politicians, her own interfering family members, and, worst of all, her infuriatingly stubborn ex-fiancé, who refuses to understand that she’s given him up for his own good.

But the greatest danger of all lies outside the manor in the falling snow, where a powerful and malevolent elf-lord lurks…and Cassandra lost all of her own magic four months ago.

To save herself, Cassandra will have to discover exactly what inner powers she still possesses – and risk everything to win a new kind of happiness.