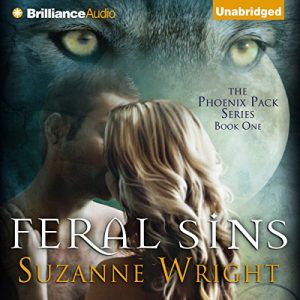 Mmmm… Trey is one HOT and broken werewolf alpha.

I was in the mood for a hot shifter/were romance and Wright delivered with Feral Sins. But it wasn’t just a romance, it had some action outside the bedroom too. There was enough werewolf fighting and mystery sprinkled between the hot smut that it made for a satisfying paranormal listen.

Taryn seems to have sex-brought-on-Tourette syndrome. At first it was funny and snarky but after a while it got old.

Looking for a sexy werewolf read with a strong and sarcastic heroine and a sexually dominating alpha leader of the pack then Feral Sins is for you. 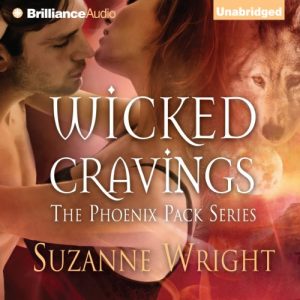 Wicked Cravings brought more of the humor, sexy times and fantastic characters that I’ve now come to expect from The Phoenix Pack series.

I really enjoyed Taryn’s birthing scene. It was great to get an update on the alpha pair from the 1st book.

“It’s totally natural to feel that way,” said Grace in a placatory, calming voice. “Some women even have one during labor.”

“What?” The word dripped with horror. “Women can sh*t when they’re in labor? Tell me that won’t happen to me! Don’t you let me sh*t, Grace!”

I love it when a girl finally gets the guy she’s been crushing hard on. Jamie and Dante is another strong couple. Both have their own past issues that keep them from bonding. Dante protects his heart in a major way after a pass love burned him. Jamie is dealing with her damaged wolf after the death of her parents.

It was heartbreaking to see the couple overcome their issues. But Suzanne Wright infused the characters with humor to help lighten the darker moods to keep a great balance.

Jamie kept calling Dante “Popeye.” Either I missed it or it was never explained where the nickname came from. It really bugged me he never questioned why she kept calling him that.

Another detail that was not explained or I missed it was Jamie’s hair color. In the last chapter it’s mentioned she had sable colored hair. I like to have character details up front to help me picture them in my head. I don’t know why but I kept picturing her with red hair.

Wicked Cravings is an entertaining addition to The Phoenix Pack series.

Yes. I can’t wait to listen to Shaya and Nick’s story!

For readers who like strong female leads and is into a lot of sex with their shifters and is ok with a dominating beta male who is into booty duty. 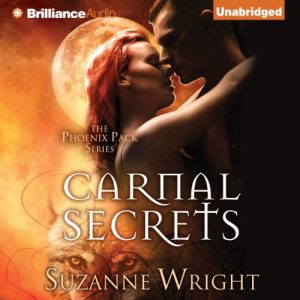 “I guess all I can do is ignore her. If that fails, I have rat poison and a shovel.”

“You should have known I love you. You’ve heard what they say: ‘Love sucks; true love swallows.’ As I recall, I’ve always taken every last drop.” – eew

I liked seeing Shaya get her HEA after being hurt by Nick in Wicked Cravings.

The stupid ‘jokes’ Shaya’s bitchy co-work made about her red hair. What is she 8? It got old.

Also I think I’m over alpha males who talk and talk and talk about what they are going to do to the female once they get her in the bed and how much he’s going to make her beg for it.

Jill Redfield is the reason I picked up Feral Sins on audio. I loved her narration of the Crossfire series by Sylvia Day. Redfield is a great narrator. She can deliver both the female and male characters in an enjoyable way. I think I actually enjoy her male voices more than the female and that’s high praise coming from me. Not many female narrators can pull off the male voices so well and still make the female voices sound feminine. The Phoenix Pack is an audio only series for me.

Feral Sins:
Taryn Warner is a wolf shifter with extraordinary healing skills – and serious problems. First, her father is determined that she mate for life with a wolf shifter named Roscoe Weston, whom the feisty Taryn can’t stand. To make matters worse, she’s also been kidnapped by Trey Coleman, a dangerous alpha male from another pack. And as much as she wants to resist Trey, Taryn is incredibly, maddeningly attracted to him. When he makes her a tempting proposal that will benefit both of them, the strong-willed healer has to decide whether escaping an unwelcomed bond with Roscoe is worth the risks of mating with Trey, no matter how temporary their allegiance is intended to be.

Wicked Cravings:
Wolf shifter Jaime Farrow has a secret. And no one – not her Alpha, not her best friend, and most definitely not gorgeous Dante Garcea – can know the truth. She thinks keeping her little “problem” under wraps from Dante won’t be so tough; after all, he’s ignored her for years, despite her best attempts at flirtation. But though Jaime is determined to face her problem alone, nothing can stop her from wanting him….

As Beta, Dante is responsible for the protection and safety of his entire pack. If a wolf is hiding something that could endanger the others, it’s his business to know about it. So when rebellious Jaime begins acting strangely, Dante makes it his mission to find out why. But after years of keeping her – and his desire – at arm’s length, he is forced to confront the danger she poses to their pack…and the passion smoldering between them.

Carnal Secrets:
Half-shifter Shaya Critchley may hold a submissive role in her pack, but she’s done taking orders. After her Alpha wolf mate refused to claim her—but committed to interfering in her life—she took off. Now she hides from him, posing as a human in a town full of anti-shifter extremist groups. She thinks he’ll never find her again, and that suits her just fine. But she’s wrong.

Nick Axton can barely control his feelings for Shaya, but he could never claim her—not if he truly cares for her. The degenerative brain condition he keeps secret would ultimately leave her with a burden rather than a mate. But when Shaya runs away, Nick can’t bear the thought of never seeing her again. After tracking her down, he discovers Shaya’s feisty and passionate side in the process…a side he’d never seen before.

Under the menacing gazes of territorial local packs and violent human extremists, Nick vows to finally claim the spirited Shaya…and despite her initial resistance, Shaya just might find his fiery determination to be the ultimate aphrodisiac.