Posted August 13, 2019 by Jennifer in Historical Romance, Listen Up!, Rating A Tags:

Audiobook Review: Wicked and the Wallflower 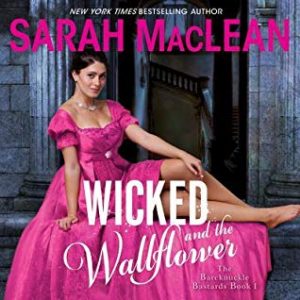 I’m fairly new to historical romances. I’ve read a few with paranormal elements and believe those are great for bridging the gap between paranormal romance and historical romance. I always thought I wouldn’t enjoy the sub-genre of romance. I’m happy to say I highly enjoyed Wicked and the Wallflower by Sarah MacLean. I initially chose this title because I needed a historical for the second Mystery Challenge for #Romanceopoly, read a Historical Romance featuring a wallflower or courtesan. Since wallflower in the title I thought I couldn’t lose, plus when I saw one of my favorite narrators, Justine Eyre, attached the title I checked the audiobook out from the library.

Wicked and the Wallflower is the first book in the Bareknuckle Bastards series which focuses on three brothers and a sister. First we start with Devon aka The Devil. He’s the “king” of Convent Garden, the bad side of town. While Devil is no Duke, he is as rich or possibility richer than a Duke (I’m still not up to the historical terms like Duke vs Earl and such). Devil earns his money smuggling American Bourbon into England through his ice company.

When Devil finds out that his brother, Ewan, posing as a legitimate heir and Duke, has decided to find a bride so he can get an heir he decides to remind Ewan that was not part of the deal they made years ago. There is to be no heir to continue their father’s bloodline.

Felicity is an old maid wallflower because of her friends shunning her out of society. These so called friends are mean and nasty to Felicity until she finds herself engaged to Ewan. But it’s not the Duke Felicity really wants, she has her heart set on the Devil instead.

Wicked and the Wallflower is a great entertaining listen featuring a bold wallflower heroine and a surprising romantic Devil. I will continue the series and try more of Sarah MacLean backlist in the very near future.

Justine Eyre does a tremendous job with the narrator. She does an amazing job switching from female to male characters. Justine is one of the few female narrators who can easily do a sexy male voice without sounding forced. I dare has I like her male voice more than some actual male narrators. I’m pretty picky when it comes of Brit accents and I think that might be a reason I’ve not listened to more historical romances. Justine does a very good job with maintaining the British accent throughout the novel. She is originally from Canada and her Brit accent sounds natural to these American ears.

When a mysterious stranger finds his way into her bedchamber and offers his help in landing a duke, Lady Felicity Faircloth agrees—on one condition. She’s seen enough of the world to believe in passion, and won’t accept a marriage without it.

The Wallflower Makes a Dangerous Bargain . . .

Bastard son of a duke and king of London’s dark streets, Devil has spent a lifetime wielding power and seizing opportunity, and the spinster wallflower is everything he needs to exact a revenge years in the making. All he must do is turn the plain little mouse into an irresistible temptress, set his trap, and destroy his enemy.

But there’s nothing plain about Felicity Faircloth, who quickly decides she’d rather have Devil than another. Soon, Devil’s carefully laid plans are in chaos and he must choose between everything he’s ever wanted . . . and the only thing he’s ever desired.