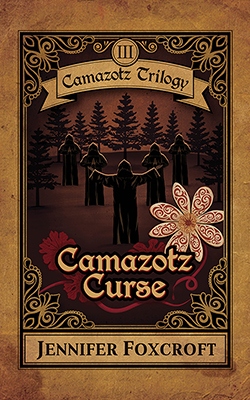 It’s here! the finale to the Camazotz Trilogy. It did not disappoint. Picking up where Sanguine Moon left off, Camazotz Curse pulls all the loose threads and themes from the previous two books together into a dramatic climax.  It reaches a very satisfactory conclusion after Foxcroft ties a tidy bow.

Camazotz Curse is more Rocks’ book than Connie’s.  They are, of course, a team, but while Sanguine Moon was more about Connie’s problems, the focus of this book is on issues that are a direct result of Rocks’ heritage. I liked it better for that reason, his unique family was the premise that hooked me into the series in the first place.  The lineage chart and names list in the back came in very handy to keep the relationships between a full colony of characters straight.

As I was hoping, Connie’s parents, Kelly and Chad, do take a slightly larger supporting role in helping to Connie solve her troubles.  Unfortunately, that doesn’t happen until toward the end of the book.  Until then Connie does her usual schtick to keep them excluded from her life.  I understand teen separation, becoming an adult, but her parents seem way too understanding and ready to believe what she tells them.  They even let her boyfriend move in with them for a time. Foxcroft justifies it suitably, but it still felt like they gave in too easy no matter how much they like him.  Teens, Foxcroft’s intended audience, probably won’t read it that way.

Connie grows up and graduates high school in this book.  Her language also “grows up” and she lets rip with some f-bombs that startled me since the first two books were more early teen-friendly.  Clearly aware of the shift in her writing, Foxcroft has Connie’s character explain herself it in a brief conversation with her mother about being able to swear like an adult when her baby sister isn’t around to mimic what she hears.  Overall, it gives a slightly harsher feel to a story that is decidedly harsher than even her dealings with Enzo, her drug dealing biological father, in the last book.

Camazota Curse is harsher because of Tronido, a bat from another colony who is psychopathic, without mercy, written to be pure evil.  It’s easy to hate him and not care what about happens to him. Whatever it is, he has it coming.  You can’t write about a merciless psychopath, however, without some pretty gruesome descriptions.  Animal lovers be warned.

My one criticism is that when we get to the climax, there are a lot of characters and problems that need to be pulled together and solved at the same time.  Foxcroft choses to focus on one of them and tell us about the others after the fact.  That to me was a flaw.  She used Rock’s POV on several occasions and it would have been appropriate to follow him on this last significant plot piece.

I definitely enjoyed this one a lot and look forward to what Foxcroft will produce next whether is more of the Camazota world or something entirely new.