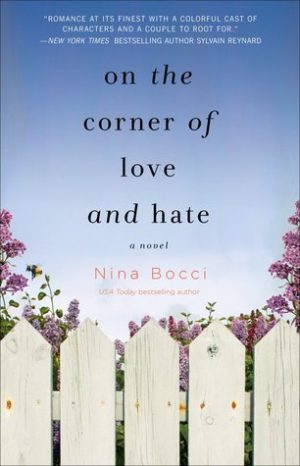 On the Corner of Love and Hate
Author: Nina Bocci
Reviewer: Jennifer
Rating: B-

After loving Nina Bocci’s debut novel, Roman Crazy (co-authored with Alice Clayton) I knew I would read whatever she wrote next. While I didn’t fall in love with On the Corner of Love and Hate,I did fall in like with it.

I love a romance featuring best friends to lovers and unrequited love. On the Corner of Love and Hate is a story with both elements. Emma and Cooper grew up together and were best friends until about high school but you don’t find out what caused the rift between them until the book is almost over. There’s a conflict in their college years that put the final wedge between them and their friendship. They still talk and work together but they are not close like they once were. They have two other friends, Nick and Henry. When the four were younger they were inseparable. All four left Hope Lake to go to different colleges but because they all loved their small home town they returned after college.

Emma and Cooper work as co-managers of a government department that handles different things for the town (think Parks and Rec, but no parks lol). They work hard to get grants and other things to bring in businesses and tourism to help out the town.  Lately, Cooper has been slacking on his duties because he is running for Mayor of Hope Lake. The current Mayor is Emma’s dad and most people in town love Cooper and believes he is the best man for the job.

Emma doesn’t want to work with Cooper on his campaign, not because she doesn’t like he would be a great Mayor, she does. She doesn’t want to spend even more time with him. She is already covering for him with his day job by doing his workload on top of hers. But Emma has great respect for Cooper’s mom who happens to the Governor of the state (I can’t remember which state but it’s up North on the East coast).

On the Corner of Love and Hate deals with Emma and Cooper working through their issues. They both want their friendship back to where it once was but they are not sure what it will take to get there. The romance element between them doesn’t really come into play until about 69-70% into the book. It’s more Emma realizing she is attracted to Cooper. Since the story is all told through Emma’s POV we don’t really know what Cooper is thinking or feeling about Emma until they hook up towards the end of the book. I would’ve like to have a few chapters from Cooper’s POV. I think it would have made On the Corner of Love and Hate feel more like a romance instead of Women’s Fiction.

All in all, On the Corner of Love and Hate, is a solid start to the Hopeless Romantic series by Nina Bocci. I look forward to more stories from the small town of Hope Lake. The next novel, Meet Me on Love Lane,is releasing in December and judging by the blurb one of the love interest will be Henry. I look forward to seeing more of him. I really liked him and Nick in On the Corner of Love and Hate.

What’s a campaign manager’s worst nightmare? A smooth-talking charmer who’s never met a scandal that he didn’t like.

When Emmanuelle Peroni’s father—and mayor of her town—asks her to help rehab Cooper Endicott’s image, she’s horrified. Cooper drives her crazy in every way possible. But he’s also her father’s protégé, and she can’t say no to him without him finding out the reason why: Cooper and her have a messy past. So Emmanuelle reluctantly launches her father’s grand plan to get this Casanova someone to settle down with and help him lose his lothario reputation.

Cooper Endicott wanted to run for Mayor, but he never wanted the drama that went with it. Now that he’s on the political hamster wheel, the other candidates are digging up everything from his past. Even though he’s doing all the right things, his colorful love life is the sticking point for many of the conservative voters. He wants to win, badly, and he knows that if he wants any chance of getting a vote from the female population, he needs to change his image. The only problem? He might just be falling in love with the one person he promised not to pursue: the Mayor’s off-limits daughter.