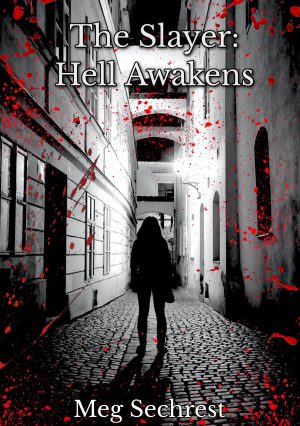 “I’m not just talking about her beauty, Arlington. Her touch … I’ve never felt more human than when I was human! What the hell was that?!”

Tom began to pace the length of the kitchen, running his fingers through his hair. He felt Arlington was up to something more than he was letting on.

“Oh yes. I forgot to mention that tiny detail. She has a touch almost as powerful as your mind power.”

Tom contemplated those words for a moment and then continued, “Explain.”

“Gladly,” he said and then he walked into his living room and sat on the worn and tattered green sofa. Tom started pacing the length of the room again. This time he was scratching his forehead, thinking and Arlington continued his explanation, “My daughter was born a Slayer, but her Slayer power is very unique. She encompasses a position as the Slayer. No one has seen or known of a Slayer for hundreds of years.

Someone with her power and uniqueness is valuable to the eternal kingdom. Slayers have the capability to bring down any and all vampires no matter the vampire’s power, ability, or age. Each Slayer has a power exclusive to themselves—Abigail’s being her superhuman touch and ability to cause vampires to feel their humanity.”

“You’re telling me she’s the only Slayer to exist since before my time?”

“Not only that, she causes vampires to feel human?” Tom asked.

“From what I’ve seen firsthand and learned from literature, previous Slayers have been incredibly strong or fast; some have had unmatchable instinct or overwhelming senses; some have even had unique powers such as manipulating weather of a small area or a slight telekinesis similar to yours … things like that. Not one Slayer has had her unbelievable capabilities along with the power of her touch and the ability to bring out the humanity in a vampire. No one has ever come across any creature of her likeness in the history of the world. All the Slayers have been unique and they’ve all been powerful, bringing forth destruction to vampires whenever one came into existence. One touch from her and a vampire is completely under her control. The difference with Abigail is that she is dangerous to humans as well.”

That particular statement caught Tom’s attention. He stopped in his pacing and turned to face Arlington.

“She can’t touch anyone. Her power works on humans and vampires. With humans, however, because they already have humanity, she takes their life. At the touch of a finger, if her adrenaline is up or her emotions are heightened, she steals everything there is of them. Every heartbeat, brainwave, and breath. Her finger steals it all the moment she makes skin-to-skin contact.”

“Interesting … tell me more about why she’s the only one that’s existed for hundreds of years. I’m curious.”

Tom sat in the chair next to the fireplace across the room. “Do you clean this house, Arlington? This place is a dump,” Tom asked, looking around at the mess.

“I assure you, I know where everything is and I need all of it for my sorcery,” gesturing to the piles of books, papers, and random items he had strewn about the room. Arlington continued, “In previous times, Slayers happened generationally. Abigail is the first to not immediately replace a previous.”

“What do you mean? Like the world has been waiting for her?”

Arlington nodded. “This is what I was explaining to you about her line being wiped out.”

“I see. We really have been waiting for her. There’s a reason she showed up at this moment in time. But do we know why?”

“I have yet to figure that part out. I cannot figure out if she is the cause or if she’s the effect.”

“Does her coming have anything to do with Hell’s gates?” Tom asked.

“Yes. I’m quite certain that it is because of her that the Hell portal has been opened, which you well know from our discussions. But what I haven’t told you is that I don’t know yet if the Hell portal was already being activated. ”

“I understand. You mean because she was turning 21 … which came first? Did she interrupt it or vice versa?”

Tom’s curiosity was growing immensely. Even more so, though, he wanted to see Abigail again. Tom was drawn in by her unbelievable beauty and the humanity her touch brought out in him. Though he told Arlington he wasn’t interested, he decided he would visit her the next night at the same place—the alley behind her work—even if there were no vampires to stake.

Born and raised in the small town of Grundy Hill, West Virginia, Abigail Taylor knew that her life was anything but normal. Everyone in town knew her father was weird and knew better than to date his estranged daughter. On her 21st birthday, Abbi awakens a dark and lethal force more powerful than any witch or warlock has ever seen. With every touch, she drains life from others and inadvertently opens the gates of Hell. With vampires and demons unleashed upon the world, Abbi crosses paths with a 231-year-old vampire playboy named Thomas Barclay.

Barclay and his family hold the keys to Abigail’s destiny as the Slayer, the only one who can send the demons and vampires back to Hell. As Tom and Abigail begin to fall in love, nefarious vampires and Satan himself conspire to keep them apart and away from their fate.

The Slayer: Hell Awakens is available in print and on Kindle. Follow Meg’s writing at https://www.authormegsechrest.com/