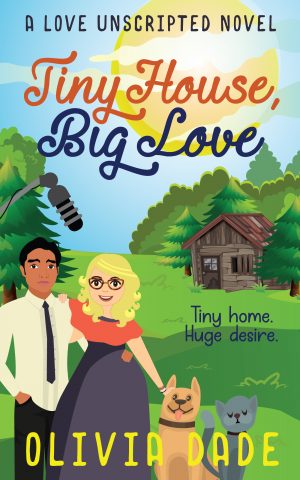 With an effort, Seb kept his voice casual. “Welcome to Concussion Alley.”

“Goddess help you if you sit up without thinking.” Lucy lifted her palm and pressed it against the loft ceiling. “I don’t see how this is workable.”

The camerawoman called up, her voice damnably chipper. “We’ll get set up in a minute. But in the meantime, keep considering whether the space is big enough for two.”

Lucy lowered her voice to a whisper. “I’m not even certain there’s room for one person to lie on top of another.”

No. No way. If this was going where he thought it was going—

Lucy touched his arm. “Can we test that, Seb?”

He lifted his head a bare inch and let it drop to the floor. Hard.

She cautiously raised herself on her elbow. “Are you okay? Did you hit your head?”

“I’m fine.” He tried to unclench his teeth. “Are you sure you want to do this? I mean, with a camera crew nearby?”

She was definitely testing his resolve. He didn’t know about anything else.

But compared to the mountains he’d move at her request, this was such a tiny appeal. And when would he get this chance ever again?

They were words he’d said many times before, in a completely different context.

Or maybe the context wasn’t so different after all. Because when she breathed, “On top,” his body reacted as if it were an invitation to bed her. And she was trembling as he moved over her and settled into the cradle of her body.

Then he could feel almost every inch of her beneath him, her warmth turning to heat as her lips parted and her breath caught. He stared down at that lush mouth of hers, wondering. Wanting. Waiting for her to stop him.

She didn’t. And he couldn’t remember anymore why this was a terrible idea.

Carefully, he cradled her head in his hand, while the other smoothed her tumbled hair back from her sweet, dazed face.

He had just enough mental capacity left to check. “Is this okay?”

She nodded, nibbling on her lower lip. In just a moment, he was going to take that lip into his own mouth and cherish it. Lick it in recompense for her abuse. Then maybe bite it again, but lightly. So lightly it would feel like a caress.

He lowered his head, and her eyes were heavy-lidded. Welcoming.

“So we’ve set up the shot from this angle—”

The camerawoman’s voice, coming from only inches away, was like a bucket of ice water poured over his body. He wrenched himself from Lucy, sitting up as quickly as he could.

That, as it turned out, was his next mistake.

On camera. Up close. In denial—but not for much longer…

After a relationship gone bad, Lucy Finch is leaving everything behind. Her old home, her old job, her old insecurities. Even Sebastián Castillo, her protective but intensely private friend of almost twenty years. Before she moves halfway across the country, though, she has one last request for Seb: She wants him to help her choose a tiny house on cable television. And maybe during the filming process, she can discover once and for all whether his feelings for her are more than platonic…

Sebastián would rather do anything than appear on HATV. But Lucy needs him, and he can’t say no. Not when she’s about to leave, taking his heart with her. Hiding how he feels with a television crew watching their every move will prove difficult, though—especially when that crew is doing their sneaky best to transform two longtime friends into a couple.

Tiny spaces. Hidden emotions. The heat generated by decades of desire and denial. A week spent on camera might just turn Lucy and Seb’s relationship from family-friendly to viewer discretion advised…