Carly Brenner is a recovering alcoholic fighting to keep her life on track after a divorce left her financially devastated. New to the Gulf Coast island of Kiss Key, she works three jobs to make ends meet and struggles with “leaping before she looks”, a habit that gets her into continuous trouble—especially as it pertains to the handsome man who rescues her from a “killer critter” hiding in her tote at the park.

Nolan Maddux is a dedicated veterinarian who has fallen for his share of interesting and beautiful wide-eyed creatures, but they’re usually covered in fur. He’s not prepared for Carly’s striking baby blues, and his attraction is undeniable even after a misconception on her part brings her claws out. But after removing a harmless kitten—which she incongruously names Killer—from her tote and taking the brunt of her misplaced sass, his fuse is lit.

Following a series of mishaps, misunderstandings, and false starts, Carly and Nolan’s romance blooms and they arrive at what they think is solid ground. But Nolan’s former fiancée and Carly’s ex-husband arrive on Kiss Key, bringing with them serious trouble including arson and an assault on Carly delivered with such cunning that she believes herself guilty of something unforgivable.

It will take Nolan’s unshakable faith in Carly, even when she has no faith left in herself, to uncover the truth and use it to find justice—for herself, for him, and the precious love they feared was lost forever. 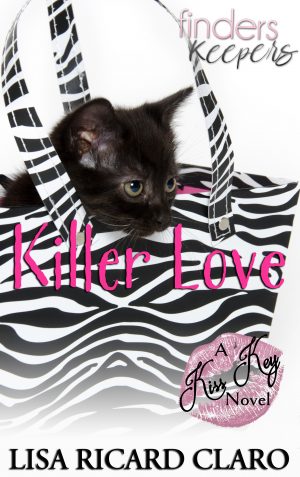 They continued strolling along the walkway, stopping to admire the boats. Catamarans, sailboats, pontoons, and cabin cruisers of varying sizes swayed against their moorings. The marina and Gulf waters beyond gleamed, cast with the deep reds and golds of oncoming sunset. The freshness of saltwater scents accompanied the breeze that molded Carly’s skirt to her legs and played with her hair.

“He’s amazing. Lovable and affectionate, and also a real pain in the butt. He loves to hide in my tote, the one you found him in. And he gets the zoomies and isn’t exactly graceful, so there’s a lot of crashing and banging going on.”

“In other words, he’s a normal kitten,” he said, stopping before a rocky outcropping.

“Exactly.” She smiled up at him. “You need to come by the house and see him sometime. I know it’s only been a short time since his exam, but he’s already doubled in size.”

“I’d like that. I owe him a thank you. If it wasn’t for Killer, you and I might not have met.”

Still holding Carly’s hand in his, Nolan took her other hand and drew her closer. His clean, soapy scent mingled with the salty air, and the breeze kissing her skin carried with it the wild sweetness of the gardenia and frangipani blooming in the park. The beguiling meld infused her with warmth, and his nearness shot burning need firing through her veins. Body throbbing, she melted against him, thrilled when he released her hands to cup her face.

Her eyes fluttered closed at the first touch of his mouth, soft and warm against hers. He didn’t kiss her, but moved his gentle lips across hers in a slow journey of sensitive exploration, whispering away to her cheeks, forehead, now caressing her eyelids, nose, the high curve of her cheekbone, sending shimmers of delight in the wake of his butterfly journey. When his mouth returned at last to hers, she parted her lips for him, eager to taste his kiss. Her fingers curled into his shirt, the heat from his body burning through the soft cotton fabric to set them both afire. His hands cradled her head, and a whimper of desire came from her throat of its own accord.

Forcing herself to a steadiness she didn’t feel, Carly drew back to look at him. His hazel eyes, dark with desire, shot need rocketing through her. Heat pooled in her belly. She wished them alone on a deserted island.

Or in an empty room.

Emitting a shaky sigh, she stepped back, taking his hand in hers again.

They walked in silence as twilight deepened. Past the marina’s docks and boats, Nolan stepped from the path onto a natural rock jetty, drawing Carly with him. He tightened his hold on her hand, and she allowed him to guide her onto the rocky promontory. They sat together on a large boulder to watch the deepening sunset. Breaking waves splashed against the rocks, and Carly removed her sandals to save them from the misty spray. A boat’s bell clanged in the distance, drawn into motion by the choppy waters. 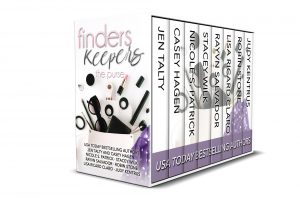 Welcome to Finders Keepers where Possession is 9/10ths of the law and it has never been so sweet…or scandalous! Curl up with eight romances where each heroine discovers a surprise in her purse that sends her on a wild ride to her happily-ever-after. Open the clasp and see what’s inside!

USA Today Bestselling Author Jen Talty: What started as a reunion ends in a deadly twist and an unexpected finish.

Nicole S. Patrick: He’d cracked the wall around her heart.

Stacey Wilk: When a chance encounter warms the heart and lights the way home.

Rayvn Salvador: Their past is the key to everything, but the move to unlock the future has yet to be made.

Lisa Ricard Claro: When the past and present collide, love can be a real killer.

Robin Stone: He lost his true love. Will he ever find another?

Judy Kentrus: Their journey to love is battered by secrets from their pasts.

Lisa Ricard Claro is an award-winning author whose work is published across multiple media to include articles, essays, short stories, children’s educational books, and her hands-down favorite: melt-your-heart Romance novels featuring unforgettable characters who tangle their lives and their hearts on the road to a life-changing love.

After years of spinning her stories from a landlocked Southern town, Lisa heeded the call of her inner mermaid and moved to the beach with her husband, cat, and two dogs, because nothing soothes her spirit and sparks her creativity like saltwater and sand. And, okay, well-made margaritas are also a plus, because mermaids love that salty stuff!

Lisa also has a heart for rescues, and you’ll find a rescued pet companion in every one of her books—because even if messy and covered in fur, love is what life is all about.