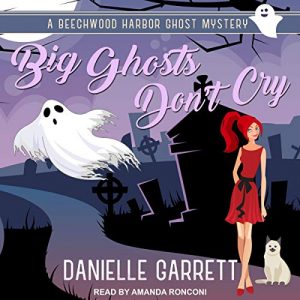 Picking up a couple weeks after the revelations laid out in the previous book, Big Ghosts Don’t Cry opens with Lucas moving to Seattle for his new job. The first quarter of the book allows listeners to catch up with the characters and learn how Scarlet is doing with her emerging powers, and how Lucas is reacting to the craziness of Scarlet’s life. I appreciate that the author creates such a strong character in Lucas; someone who will stand by Scarlet’s side, regardless of the curveballs. I also like that while Scarlet has fears that Lucas will have enough and leave, she doesn’t let them completely control her life. Finally, I love the maturing nature of Scarlet and her relationship with Lucas; it’s evolving along side Scarlet, making the story richer. This book is equal parts mystery and romance.

Still trying to understand the powers that are manifesting within her, Scarlet discovers she can send ghosts to “the other side,” however she isn’t aware of the repercussions if a ghost is sent before it’s ready. New character, Karla the funeral home manager, scolds Scarlet as she tells her that demons (are real) can come through to our side when this happens. This leads Scarlet, et. al. to their usual mystery solving activities. I enjoyed the murder mystery piece of the story, but found Scarlet’s awakening powers more exciting. And I’m not so sure how I feel about demons being added to the mix of “supernatural stuff” going on in the Beechwood Harbor world.

I don’t know if the author plans to continue the series, because as written Big Ghosts Don’t Cry  lends itself as a solid stopping point for the series. However, I’m really enjoying the Beechwood Harbor Ghost Mysteries and hope for more adventures for Scarlet, Lucas, and the gang.

Fresh off my Voodoo-tastic vacation to New Orleans, I find myself presented with the first test of my newly discovered magic. There’s been a murder in the neighboring town of Pine Shoals and the victim has decided she’s not cut out for the spectral life and needs a gentle push into the Otherworld.

As it turns out, conjuring some magic and telling a ghost to ‘go towards the light’ isn’t quite good enough, and now the hysterical ghost is stuck in some kind of limbo land.

It’s up to me to solve her murder before the poor ghost goes insane—or, becomes demon food. Whichever happens first.