Audiobook Review: Bringing Down the Duke 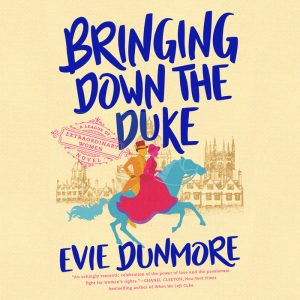 Annabelle is trapped in a life as an unpaid servant for her male cousin, so she jumps at the chance to be one of the first women to study at Oxford. As a condition of her scholarship, she must join the local suffragist movement. Sebastian, Duke of Montgomery, has spent years building back the dukedom his father left in shambles. The Queen leverages his desire to win back his ducal home by forcing him to be the chief strategist for the Tory party for the upcoming elections. A tale of a bluestocking, country girl fighting for women’s rights who falls for the enemy – a duke and the chief strategist for the Tory Party, Bringing Down the Duke gives readers a grand romance between two people who are meant to be, but born into stations that forbid their love.

Annabelle and Sebastian share an almost epic love. I appreciate that the while the passion is hot and burning, the romance builds slowly over the course of the book. Annabelle is extremely cautious, always aware of the repercussions to her reputation and life if she were to take up with a duke. Sebastian knows he can never marry a commoner like Annabelle, but is willing to take care of her as a mistress or however else she desires. Both understand not only their own place in society, but the roll of the other, so they accept they can never be. Their friendship grows as they flirt and banter, neither able to stay away from the other. And slowly, each comes to realize what is truly important in life, leading to more than one emotional scene.

With the dual POV, readers understand the wants, needs, and responsibilities of both characters. This makes it all the more heart-breaking by knowing how much each cares for the other, especially when Annabelle tries to protect her duke by refusing him to avoid his own downfall. The combination of getting into the minds and hearts of both main characters, as well as the passionate slow-build of their love, hooked me. I was invested in their relationship, hoping it would work, unsure how it would end (I mean, I know HEA, but..) I like that the author addresses the class separation and makes it an important part of the story, rather than ignoring the realities of the time. I also love me a strong historical heroine – one who doesn’t conform to the times, which is most certainly Annabelle. She thinks she’s broken because she’s inquisitive and engages conflict rather than demurely shying away. While this is a bit off-putting to some, Sebastian appreciates her candor, after getting to know her.

Narration: Ms. Jasicki has a feminine voice with a clear, but not overwhelming British accent. She uses this neutral female voice for her narrator, adjusting her voice for each character’s dialogue. Annabelle’s dialogue is almost the same as the narrator, while her Sebastian is a bit deeper. Ms. Jasicki also adjusts her accent for locale and station. I loved her performance of Annabelle’s friend Catriona, a soft-spoken Scottish lady. Overall, the males are slightly deeper, but not overly masculine; however, it fits the reading of the story. She does a nice job presenting the words and reading the story to me.

In the end, Sebastian and Annabelle captured my heart. And the author has set the stage for future stories for Annabelle’s close friends. I look forward to finding out what is in store for this League of Extraordinary Women.

England, 1879. Annabelle Archer, the brilliant but destitute daughter of a country vicar, has earned herself a place among the first cohort of female students at the renowned University of Oxford. In return for her scholarship, she must support the rising women’s suffrage movement. Her charge: recruit men of influence to champion their cause. Her target: Sebastian Devereux, the cold and calculating Duke of Montgomery who steers Britain’s politics at the Queen’s command. Her challenge: not to give in to the powerful attraction she can’t deny for the man who opposes everything she stands for.

Sebastian is appalled to find a suffragist squad has infiltrated his ducal home, but the real threat is his impossible feelings for green-eyed beauty Annabelle. He is looking for a wife of equal standing to secure the legacy he has worked so hard to rebuild, not an outspoken commoner who could never be his duchess. But he wouldn’t be the greatest strategist of the Kingdom if he couldn’t claim this alluring bluestocking without the promise of a ring…or could he?

Locked in a battle with rising passion and a will matching her own, Annabelle will learn just what it takes to topple a duke…