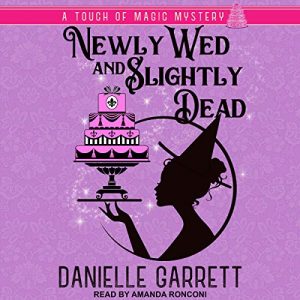 Newly Wed and Slightly Dead kicks off the third spin-off series from the wonderful Beechwood Harbor Magic Mysteries series by Danielle Garrett. The series features magical wedding planner, Anastasia Winters, a longtime friend of Holly Bolt (of the Beechwood Harbor series). While there is a loose connection between the series, Newly Wed and Slightly Dead is very much a standalone, and knowledge of the original series is not needed.

Anastasia has worked tirelessly over the past six years to earn a position as a magical wedding planner. Now is her time to shine with her client’s event being the largest wedding of the firm’s history. However, when the mother of the groom is found murdered the night of the rehearsal dinner, Anastasia may have to kiss her career goodbye.

Newly Wed and Slightly Dead is on the shorter side, but it is a complete and interesting tale. As a fan of the Beechwood series, I enjoyed seeing the Haven side of things, where magic is “out” and paranormals don’t have to hide their true natures. And while the story is certainly classified as a cozy mystery, I liked that main character Anastasia isn’t obsessed with crime fighting or catching a murderer. She just happens to be in the middle of the investigation and her clients are key to the investigation. Anastasia is a solid character – an “average” woman trying to make ends meet and live her life. Nothing crazy or out of the ordinary. Additionally, there is a blooming romance with the head SPA detective. There is an attraction that I’m certain will be explored in the future.

Narration: I’ve been listening to Amanda Ronconi read the two Beechwood Harbor series, and now this spin-off, for over a dozen books or so, and she has consistently done a wonderful job. The Touch of Magic Mysteries is voiced from the first person POV of Anastasia. Ms. Ronconi gives Ana a solid presence, without confusing me as to the other main characters Holly and Scarlet (although neither are in this book). She provides enough differences between character voices to make each distinguishable from the next. Her male voices are generally deeper and fitting and familiar if you’d listened to the other series. However the characters and setting/story are different enough not to cause confusion when listening.

Nothing ruins a rehearsal dinner quite like a passive-aggressive toast from the unhappy mother of the groom. Things go from bad to yikes when she’s found reduced to a pile of ashes and couture and the bride is pegged as the one wielding the wooden stake.

When a vampire marries a human, things are bound to get messy…

After years spent working the birthday party and baby shower circuit, Anastasia Winters finally has a corner office and a host of supernatural clients all begging her to plan their special day. But following a brush of bad luck, she finds herself on the brink of losing it all. With an ultimatum from her boss on the table, her next wedding has to be perfect.

When the vampy mother of the groom is found dead, the bride goes on the run, and Anastasia is forced head-first into the murder investigation if she has any chance of getting the wedding back on track and keeping her job.

Unfortunately, this is one wedding crisis that requires more than a strategically placed bobby pin or double-sided sticky tape.

Can there be a fairy tale ending, or will it be Happily Ever Never?