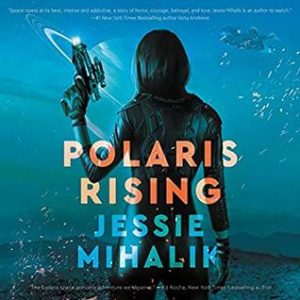 On the run from her powerful father and obsessive fiancé, Ada von Hasenberg has lived off the grid for the past two years. But when a team of ruthless mercenaries capture her, she forms an unlikely alliance with the universe’s most wanted man, Marcus Loch. Stuck in the middle of a deadly political game, the pair must let go of perceived notions and stereotypes to work together for their common goal of freedom.

Polaris Rising is an exciting sci-fi adventure, filled with political intrigue, deadly clashes, manipulating bad guys, and heroic good guys. The baseline story surrounding the Consortium politics and looming war is engaging. The world of the Royal Consortium is unveiled through actions, fed to listeners via fascinating characters and interesting sci-fi tech. The author provides amazing detail, creating a world that has depth and dimension, with a gripping conflict and reason for war, and I look forward to seeing how it will all play out.

As Ada and Loch fight their way through the universe to uncover truths and secure their freedom, the pair find themselves pulled together by circumstance and lust. However, as they spend time together, they let down their guards and find solace and friendship. They come from different worlds, and their relationship has starts and stops due to misconceptions and poor communication. The danger and intensity causes heightened emotions and allows the pair to give into the lust they normally wouldn’t have done. But it’s their eventual willingness to communicate even when tough, to share and not hide behind walls, that allows them to love. The romance and the fight for freedom share equal page time, and the story does have an HFN/EA. Ada and Loch are together and free, but will have a tough life. With war looming, I hope that we continue to see what they do for the cause in the next book.

Additionally, I loved the side characters Veronica and Reese. They provide great support, yet both have their own stories. I’d love at least a novella focused on the pair; theirs is a story that should be shared.

Narration: Polaris Rising is shared via first person POV of Ada by Ms. Zeller.  Her performance of the narrator and Ava is on the deeper side, with a hint of raspy. I enjoyed the sound. She modulates the voices during dialogue, with each character having a unique enough sound to be identifiable on its own. She even changes Ava’s voice depending on the “persona” she’s playing – aristocrat, fighter, etc. Males are deeper and definitely masculine. Loch has a lovely, sexy gravely voice. While at first I was taken aback by the amount of loud, audible breathing noises, it worked because the heroine was in danger. Ms. Zeller excels at the non-speech sounds like breathing, yawns, sighs, etc.

Polaris Rising is a well-written, thrilling story and I look forward to finding out more about the Consortium Rebellion in books to come!

A space princess on the run and a notorious outlaw soldier become unlikely allies in this imaginative, sexy space opera adventure—the first in an exciting science fiction trilogy.

In the far distant future, the universe is officially ruled by the Royal Consortium, but the High Councillors, the heads of the three High Houses, wield the true power. As the fifth of six children, Ada von Hasenberg has no authority; her only value to her High House is as a pawn in a political marriage. When her father arranges for her to wed a noble from House Rockhurst, a man she neither wants nor loves, Ada seizes control of her own destiny. The spirited princess flees before the betrothal ceremony and disappears among the stars.

Ada eluded her father’s forces for two years, but now her luck has run out. To ensure she cannot escape again, the fiery princess is thrown into a prison cell with Marcus Loch. Known as the Devil of Fornax Zero, Loch is rumored to have killed his entire chain of command during the Fornax Rebellion, and the Consortium wants his head.

When the ship returning them to Earth is attacked by a battle cruiser from rival House Rockhurst, Ada realizes that if her jilted fiancé captures her, she’ll become a political prisoner and a liability to her House. Her only hope is to strike a deal with the dangerous fugitive: a fortune if he helps her escape.

But when you make a deal with an irresistibly attractive Devil, you may lose more than you bargained for . . .