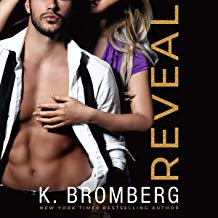 After the way Resist ended on a cliffhanger I had to get my hands on Reveal ASAP.

Reveal picks up where Resist left off. The biggest difference between the two installments is the element of danger. Reveal felt like a romantic suspense because Vaughn is in danger from the evil senator who is blackmailing her about Wicked Ways. There’s also another suspenseful thread dealing with another character in Vaughn’s life but it develops towards the end of the book.

Vaughn and Ryker had many ups and downs in their relationship; there were times I wanted to slap them both. They needed to get their crap together, and luckily they finally did. For most of the book, they would make the same mistake, no communication, mostly on Ryker’s part. He would run off and do something to “help” Vaughn but it would only make things worse.

All the things Vaughn was juggling, Wicked Ways, trying to adopt her niece Lucy, relationship with Ryker, and not landing in jail, or worse at the hands of the slimy senator, continued to weight her down. She showed how strong she is by dealing with it all the best she could. Then you throw in the fact that if she hadn’t started Wicked Ways in the first place she wouldn’t have all these problems. Reveal was full of angst and danger. If it was a movie I would have been yelling at the screen at how stupid some of the characters were being. But don’t get me wrong, I loved every minute of it.

Reveal wraps up Vaughn and Ryker’s story. I hope a couple of the side characters get a story, but I don’t know if there are plans for more the series, or if it was only meant to be a duet.  I plan on trying some of K. Bromberg’s backlist, I actually have one of her standalone novels on audio, Sweet Cheeks so I’ll start there.

There was a narrator change. Erin Mallon did not voice Vaughn’s POV this time around. Samantha Brentmoor took over (not sure why, maybe scheduling issues) but she did a great job. Reveal is my first time listening to Brentmoor, but it will not be my last. Like Ms. Mallon, Samantha does an amazing job with male voices.

Jason Clarke is the reason I listened to Reveal instead of reading the eARC I downloaded from Netgalley. I was ready to start reading after writing my review for Resist but I had a couple of other review books I need to get done and while I was listening to those the early copy of Reveal on audio for review became available so I jumped on it.

If you know me and my love of Sebastian York and his sexy voice, then you know I’m really saying something when Jason Clarke is my new favorite male narrator for sexy romance novels.  I think it’s because Jason does a better job with female voices and making the male characters sound so different from each other. York is a great narrator but his voice doesn’t have the same range as Clark’s does.

I play to win, and I won’t let anything—or anyone—get in the way of what I want.

The first time I met Vaughn Sanders, I knew I wanted her. Confident, intelligent, and downright sexy. I thought I knew how to play her game. I was ready and willing for the challenge. Little did I know she was full of secrets and surprises.

Charming a woman into my bed has never been my problem. It’s the relationship part that is. They want it. I don’t. But can you blame me? Broken marriages are how I make a living. Hell, no self-respecting man would let a woman own his thoughts, invade his dreams, and steal his heart. So how in the world has Vaughn done that to me?

I’ve fallen in love with her. There. I said it. But that acknowledgment comes with a heavy price.

Everything and everyone seem to be working against us, leaving us both to question whether what we have is worth the cost.

I’ll be damned if I go down without a fight.